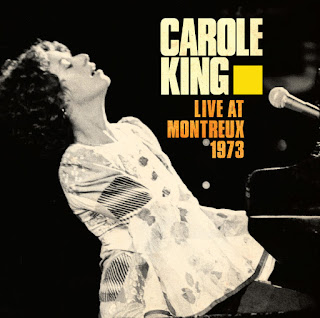 American recording artist Carole King has had an illustrious musical career that has latest over six decades. She released her first single in 1958 and topped the U.S. album charts three times with the records "Tapestry" (1971), "Music" (1971) and "Wrap Around Joy" (1974). On June 14th, Eagle Rock Entertainment will add another notch to this amazing catalog with the newly discovered concert "Live At Montreux" from 1973.

It features Carole King at the height of her popularity as she performs an hour long, eighteen-song set that begins with the number one single "I Feel The Earth Move." She is only accompanied by a piano as she graces the audience with the lovely "Home Again" and "Beautiful." She is then joined onstage by a horn section for her original composition of "Up On The Roof." Her full band finally comes out (in St. Louis Blues shirts), as they perform songs from their new album at the time, "Fantasy."
The energy really picks up with the funky sounds of "You've Been Around Too Long" and the jazzy groove of "Haywood," as you can appreciate King conducting the full band through these new numbers. It seems like Carole King really enjoys herself during this performance as she always has a smile on her face as she performs "Believe In Humanity" and "You've Got A Friend." This new live set titled "Live At Montreux 1973" will be released as a CD & DVD set, along with just a stand-alone CD and on vinyl. To find out more about this great new release, please visit eagle-rock.com/carole-king-us.
Posted by JP's Music Blog