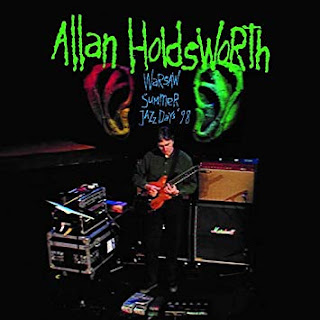 The Manifesto Records label has done an exceptional job keeping the music of legendary British guitarist, Allan Holdsworth alive and vibrant. Back in December of 2018, the label kicked off the Allan Holdsworth "Live Archive Series" with a show from 1984 that was filmed in Japan (review:  http://www.jpsmusicblog.com/2018/12/manifesto-records-begins-allan.html). Now, six months later we get the second release in the series, the "Warsaw Summer Jazz Days '98" CD and DVD release.

The show was professionally filmed for Polish television and is included on the DVD, along with bonus footage from the show that was also performed, but not shown during the original broadcast. The show features the Allan Holdsworth Trio running through an eight-song set in front of a small audience. The film does a great job capturing the band as they work together and it also allows each member to get their turn showcasing their talents. You will simply be in awe watching Holdsworth take on a guitar solo with strength and power, and then just let the music float on into the next track.
The CD features the entire hour long show in its original order, while the broadcast was eventually edited down to only 45 minutes. The bonus footage on the DVD contains the songs that were not shown on Polish television. The video quality of the bonus footage is not as sharp as the parts of the show that were featured during the broadcast, but having all of the footage is a great plus for this new release. To find out more about the newly released Allan Holdsworth Trio "Warsaw Summer Jazz Days '98," please visit manifesto.com/allan-holdsworth.
Posted by JP's Music Blog