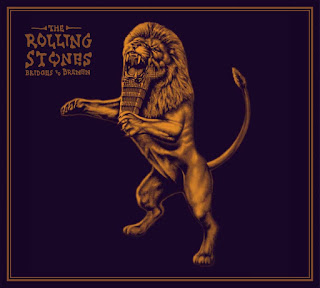 Arriving on June 21st from Eagle Vision is the live concert film (and soundtrack) from The Rolling Stones. The new release titled "Bridges To Bremen" features the band on the second leg of their hugely successful "Bridges To Babylon" world tour, performing a show in Bremen, Germany. The show was originally filmed and broadcast on European television and showcases the full touring force of The Rolling Stones in the nineties.

After kicking off the show with a couple of classics from their sixties catalog ("(I Can't Get No) Satisfaction" and "Let's Spend The Night Together"), The Stones mix in some deep cuts from their latest "Bridges To Babylon" album. The quality of the film is excellent and the cameras are right on stage next to Mick Jagger, Keith Richards and Ron Wood, but their are so many cutaways during a song that you start to loose track of what's going on.

This tour also featured the band's first permanent b-stage and the first time that the audience was able to select one of the songs to be performed that evening, which happened to be "Memory Motel." The b-stage was filmed nice and tight and allowed you to watch everyone feed off each other, as they performed classics like "It's Only Rock 'n' Roll (But It Like It)" and "You Got Me Rocking." Highlights of the show include watching Keith Richards and Ron Wood trading solo during "Symphony For The Devil" and "Jumpin' Jack Flash."

This new live show is a critical part of The Rolling Stones catalog and will be released in a number of different formats including a 2-CD/DVD set, 2-CD/Blu-ray set, a triple-vinyl set and in digital format. The DVD and Blu-ray both contain bonus tracks recorded in Chicago from earlier in the tour. To find out more about The Rolling Stones "Bridges To Bremen" release, please visit eagle-rock.com/stones-bridges-us.
Posted by JP's Music Blog