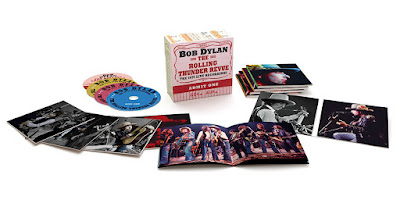 Back in 2001, iconic movie director Martin Scorsese was approached about conducting a documentary about Bob Dylan's rise to super-stardom in the sixties music scene. The film "No Direction Home" went on to win numerous awards, including a Grammy Award for the filmmaker. Now, Scorsese has taken on the task to once again tell the story of Bob Dylan's 1975 traveling roadshow, The Rolling Thunder Revue. The new documentary will premiere on Netflix on June 12th, but even more exciting than the movie, is the accompanying soundtrack "The Rolling Thunder Revue: The 1975 Live Recordings."

This newly released box set includes 14 CDs of music recorded during the 1975 tour, including rehearsals and rare one-time bonus performances. Along with the 14-discs, is a 58-page booklet that contains rare, never-before-released photos from The Rolling Thunder Revue shows and a new essay from novelist/musician Wesley Stace.
The first two discs of the set are raw rehearsal takes for many of the songs that would be performed on the tour, as well as some that would never make it out of the rehearsal room. The quality of these "fly on the wall" recordings is not great, as you hear Bob Dylan running through nearly two dozen songs, with many of them incomplete versions. These songs are stripped down to just the basics as he performs multiple takes to songs like "Isis" and "One More Cup Of Coffee."
The third disc includes some more polished rehearsal takes performed at the Seacrest Motel in Falmouth, MA, the day before kicking off The Rolling Thunder Revue tour in Plymouth, MA. Highlights of this session includes the rarely performed songs "Slow And Easy" and "Ballad Of A Thin Man." The set also includes five full shows of Dylan's on stage performances, either solo or with the Rolling Thunder Revue Band. These shows take up discs 4-13 and all have a similar setlist, with a few changes, including swapping out songs like "Simple Twist Of Fate," "Tangled Up In Blue" and "Mr Tambourine Man." All of the shows sound exceptional, compared to what have only been offered by bootleggers for so many years.
The final disc in the set includes a dozen tracks of rare performances, including an acoustic duet with Joan Baez on "One Too Many Mornings" and a rare cover of Smokey Robinson & The Miracles' "Tracks Of My Tears." The set closes with a performance of "It Takes A Lot To Laugh, It Takes A Train To Cry" at the "Night Of The Hurricane" concert at Madison Square Garden with The Band's Robbie Robertson lending a hand on guitar.
In conjunction with this new 14-disc box set, is the re-issue of volume 5 from the Bob Dylan "Bootleg Series," which has been out of print for over a decade and highlights The Rolling Thunder Revue on three vinyl LPs. To find out more about the new Bob Dylan box set "The Rolling Thunder Revue: The 1975 Live Recordings," please visit bobdylan.com.
Posted by JP's Music Blog