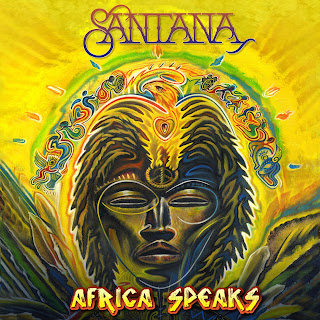 Legendary guitarist Carlos Santana loves the rhythm and grooves of Africa that he brought that inspiration to his latest album "Africa Speaks." Santana has explained that the music of Africa is "not a stranger to me, it's in my DNA." Carlos was so inspired that he and his band recorded 49 songs in only 10 days, this time with the help of award-winning producer Rick Rubin.

The new 11-song release kicks off with the title-song, "Africa Speaks," as Carlos Santana weaves his guitar solos around the amazing African rhythms and local native chants. Next, Santana brings us the swift pace of "Batonga," which has a very nostalgic feel, as the song was improvised during a free form jam session. This album also introduces us to Spanish singer, Buika, who steals the show on the deep funk groove of "Oye Este Me Canto." The centerpiece of the album has to be the nine minute guitar build-up of "Blue Skies," which leads the way to the seventies-type rock vibe of "Breaking Down The Door." Santana finish up their new album with addictive pop/rock melody of "Los Invisibles" and the energetic blast of "Candombe Cumbele."
Santana will be hitting the road this summer, beginning June 20th in California, before making their way across the country. For a complete list of tour dates and to find out more about the new album "Africa Speaks," please visit santana.com. 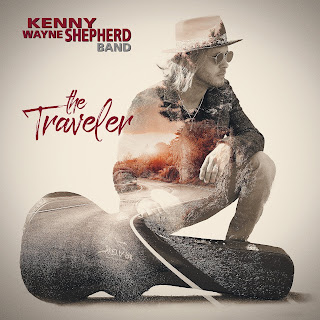 Fellow guitarist extraordinaire Kenny Wayne Shepherd recently released his new album titled "The Traveler."  The album was recorded between breaks for touring, as the band where ready to hit the studio with the songs already in place. The new ten song release includes eight brand new originals with a couple of covers, as the Kenny Wayne Shepherd Band try their hand at Buffalo Springfield's "Mr. Soul" and Joe Walsh's "Turn To Stone."

Kenny Wayne Shepherd kicks down the door on the undeniable blues groove of the opening track "Woman Like You." He keeps the fire burning, ripping strong guitar riffs during "Long Time Running" and the nostalgic stomp blues of "I Want You." Shepherd get more melodic on the slow moving "Gravity" and the country-like ballad "Take It On Home," before the energetic, all-out rock attack of "Mr. Soul." The album closes with the mainstream pop tones of "Better With Time" and the big blues/rock guitar sound of "Turn To Stone."
The Kenny Wayne Shepherd Band is currently on the road throughout the summer. For a complete list of tour dates and to find out more about the new album "The Traveler," please visit kennywayneshepherd.net.
Posted by JP's Music Blog