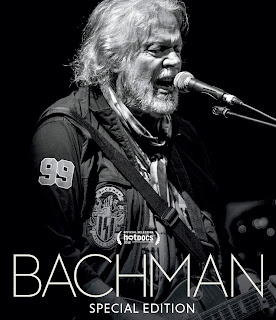 As bandleader Randy Bachman enters his sixth decade as a music performer, director John Barnard took on the task of explaining the life of this iconic artist. The nearly 80-minute documentary features interviews with his children, his brother Gary and loads of artists that admire Bachman for his achievements in music. Randy Bachman is one of the most well-known Canadian artists in the world, as he topped the music charts twice, once with his band The Guess Who and then again with Bachman-Turner Overdrive.

The documentary finds Bachman explaining how he picked up the guitar when he was young and was almost self-taught, by listening to records. Fellow musicians Neil Young, who has known Randy for over fifty years, and band leader Paul Schaffer help explain the early years with the rise of The Guess Who in the sixties. There is tons of archival footage that help tell the story of the life of Randy Bachman.
The film jumps between Bachman's current endeavors, which is recording a new album of George Harrison covers, and his rise to musical immortality. After leaving the The Guess Who, Randy Bachman rebuilt his musical career when his found Fred Turner and created Bachman-Turner Overdrive. The film includes great live footage of the band in the seventies, while also showing Bachman performing the BTO songs in today's world.
As Randy Bachman was touring the world with BTO and making large amounts of money. He had a special house and barn studio built in California and nannies to watch the kids, before the bottom falls out for Bachman. In the late seventies, BTO breaks up and once again Randy Bachman has to start over, but this time without the support of his wife and kids, due to his divorce.
One of the amazing parts of the documentary is the hundreds of guitars that Bachman has collected over the years that he houses in the archives, located somewhere in Vancouver, Canada. Randy explains the guitars that are extra special to him, as each guitar has a story that could make up another entire documentary.
The film "Bachman: Special Edition" was released back on May 10th on Blu-ray and DVD, and includes loads of bonus interviews with Randy and Neil Young. To find out more about "Bachman: Special Edition," please visit mvdshop.com.
Posted by JP's Music Blog