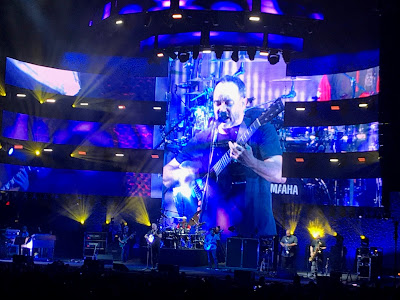 Connecticut has become one of the favorite stops for the Dave Matthews Band, having played here three times in the last year, including Saturday night at the Xfinity Theatre in Hartford. Their summer tours have always been a huge draw, going all the way back to the mid-nineties and has become the concert event of the summer for fans of Connecticut and the Northeast.

The nearly three-hour set began with the entire band jumping into "#41" (rumor was that this was the Dave Matthews Band's forty-first show in Hartford), which was highlighted by solos from guitarist Tim Reynolds and trumpeter Rashawn Ross. Watching the band lock in together on a jam is always a sight to behold. The band keep the energy flowing with early favorites "So Much To Say," "Too Much" and "Warehouse," which also featured an extended jam to close out the song. The Dave Matthews Band are also still promoting their latest studio release "Come Tomorrow," with performances of "Samurai Cop (Oh Joy Begin)," "Do You Remember" and "She."
The audience exploded into cheers when the first notes of "Don't Drink The Water" rang from the speakers, before organist (and newest member) Buddy Strong brought the crowd to church with his solo during "Everyday." A huge grin was noticed on the face of Dave Matthews when the band played "Jimi Thing" and the audience sang the entire first verse and chorus of the song, before Matthews was even needed to join in. The song was one of the highlights of the set, as Tim and Buddy traded solos, before the horns of Rashawn Ross and Jeff Coffin joined in the fun. Then, the band played their only cover song of the evening, a condensed version of Steve Miller Band's "Fly Like An Eagle."
Drummer Carter Beauford got his moment with a short drum solo that began the country/rock of "Cornbread," which Tim Reynolds took to new heights with another amazing guitar solo. The Dave Matthews Band closed out their set with the fan favorite Pantala Naga Pampa/Repunzel," which only left the crowd wanting more.
The short, two-song encore began with the locomotion rhythm of "Two Step," which led into a raucous version of "Halloween." As the band exited for the evening, Dave Matthews stood at the front of the stage taking selfies with the audience members in the pit. This signaled the close of another great, memorable evening from one of the premier touring acts in the world, the Dave Matthews Band.

Setlist: #41, So Much To Say, Anyone Seen The Bridge, Too Much, You Never Know, Warehouse, Samurai Cop (Oh Joy Begin), Don't Drink The Water, The Space Between, So Right, Do You Remember, Seven, Everyday, Jimi Thing, Fly Like An Eagle, She, Corn Bread, Typical Situation, The Song That Jane Likes, Pantala Naga Pampa, Repunzel
Encore: Two Step, Halloween
Posted by JP's Music Blog