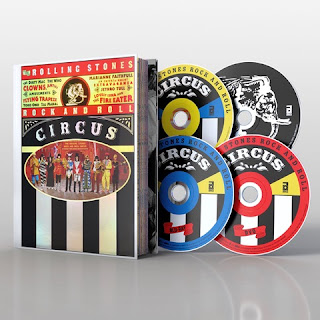 Back in December 1968, The Rolling Stones had the idea of inviting some of their friends to gather together and play music in a "Big Top" circus atmosphere. The show was going to be filmed and released as a feature length film that include rare concert footage performed along side circus acts. After the film was shot and viewed by The Rolling Stones, it was eventually shelved, due to the Stones' self-proclaimed "sub-par" performance. It would not be seen by an audience in theaters for another thirty years, followed by a 1996 release on VHS and laserdisc, with an accompanying soundtrack on CD.

Now, for the first time on June 7th, the film will be released on Blu-ray and DVD, featuring a newly remastered 4K Dolby Vision restoration of the show. Also, for the first time, the show will be released on vinyl as a three LP set. The entire soundtrack was also remastered and sounds amazing. The three slabs of heavyweight vinyl display a great range of highs and lows within the music. The deep bass and drums during The Who's "A Quick One, While He's Away" will shake your speakers, while Marianne Faithfull's vocals in "Something Better" sound so sweet and pure on vinyl. 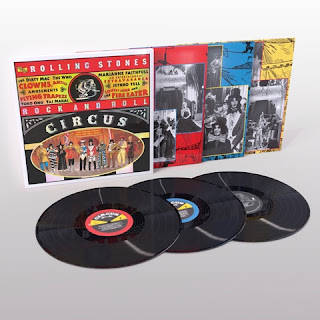 The Rolling Stones' six song performance is presented entirely on it's own disc and has a great feel to it. The instruments are strong and have separation between them, as you can clearly hear Bill Wyman's bass on "Jumpin' Jack Flash" and Nicky Hopkins' keyboards on "No Expectations." If I had to pick out one thing to address, is that maybe Mick Jagger's vocals are not as strong and up-front in the mix as I remember them being on the original soundtrack release. The Rolling Stones' passionate performance of "Sympathy Of The Devil," one of the best in their history of live performances, is worth the price of this triple-vinyl set.
This new release also includes never before heard, rare performances from bluesman Taj Mahal, The Dirty Mac (John Lennon, Eric Clapton, Keith Richards and Mitch Mitchell) and classical pianist Julian Katchen. I wish that there was also bonus songs from The Rolling Stones and The Who, but it's not worth complaining about since we do get a jamming version of The Beatles' "Revolution" and "Yer Blues" performed by The Dirty Mac supergroup.

The newly released film also includes a load of extras, including backstage footage, newly recorded film commentary, interviews and the restored previously unreleased footage of the bonus songs that appear on the soundtrck. A deluxe edition of "The Rolling Stones Rock And Roll Circus" comes with a Blu-ray/DVD/2 CD soundtrack of the film, along with a 44-page booklet with newly released photos and the original 1969 "Rolling Stone" magazine's essay of the show by David Dalton. To find out more about these new releases of "The Rolling Stones Rock And Roll Circus," please visit facebook.com/RockAndRollCircusMovie.
Posted by JP's Music Blog