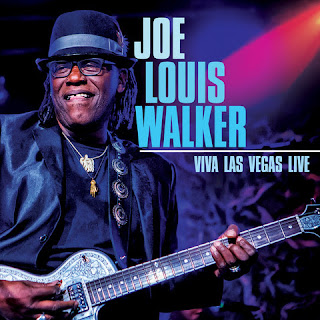 Joe Louis Walker's career has spanned close to six decades, which allowed him to perform with some of the all-time best, like John Lee Hooker, Muddy Waters, Willie Dixon and even Jimi Hendrix. Walker was inducted into the Blues Hall of Fame in 2013 and performed at the Presidential Inauguration for George H. Bush.
He latest release features a load of Walker originals like "I'm Not Messin' Around," "Do You Love Me?" and "Too Drunk To Drive Drunk." The film perfectly matches Walker's demeanor on stage, as they keep the focus on his amazing guitar playing and his equally amazing backing band. Some of the highlights include the slow boogie of "Sugar Mama" and the upbeat, addictive melody of "In The Morning." Walker blazes a trail with is electrifying slide guitar solo during "Soldier For Jesus," which can only be matched by the night's closing jam "Like This Way." To find out more about the newly released Joe Louis Walker "Viva Las Vegas Live," please visit cleorecs.com.
Posted by JP's Music Blog