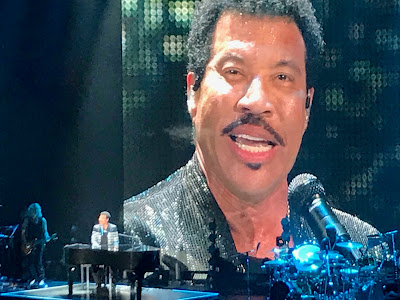 Legendary music icon Lionel Richie is taking his hits on the road this summer, as he performed Saturday night to a packed arena at Mohegan Sun. The stop is part of his "Hello Hits Tour" and this tour follows a residency that Richie performed out in Law Vegas, which will also supply a new live album later this year.

Many of the fans in attendance grew up on Lionel Richie's music, as his music touched people in different ways. Richie explained that he would see people in the audience crying during a "happy" song and see other people laughing during a "sad" song. One thing was for sure, that everyone in that arena knew every word to his songs.
Immediately following the night's opening song, "Running With The Night," Lionel Richie received a loud standing ovation, the first of many that evening. Richie was very personable with the crowd, telling stories and making jokes, while being genuinely amazed at the response he received that evening.
The audience sang along to his many hits, including "You Are" and "Stuck On You," before leaving their seats to the excitement of one of Richie's biggest hits "Dancing On The Ceiling." He would also pay respect to his seventies career when Richie was a member of the funk/soul group, The Commodores, performing melody of classics like "Fancy Dancer," "Sweet Love" and "Lady (You Bring Me Up)."
One of the sweetest moments of the night was when Lionel Richie stopped in the middle of one of his stories to point out a little girl in the audience who was fully enjoying the show. The ninety-plus minute performance capped off with the dance club favorite "Brick House," the undeniable "Hello," the outstanding "Say You Say Me" and a sing-along to "We Are The World."
Nobody exited the arena, knowing that there was one more song that needed to be played by the legendary artist. After a quick change to a white sequence jacket, Lionel Richie brought the house down with his number one hit single "All Night Long (All Night)."
With career that has lasted over five decades, Lionel Richie continues to entertain his loyal fans that have grown up on his music. Whether young or old, Lionel Richie's music has been a part of everyone's soundtrack to life.

Setlist: Running With The Night, Easy/My Love, Penny Lover, Truly, You Are, Stuck On You, Dancing On The Ceiling, Three Times A Lady, Sail On, Fancy Dancer/Sweet Love/Lady (You Bring Me Up), Just To Be Close To You, Endless Love, Brick House/Fire, Hello, Say You Say Me, We Are The World
Encore: All Night Long (All Night)
Posted by JP's Music Blog