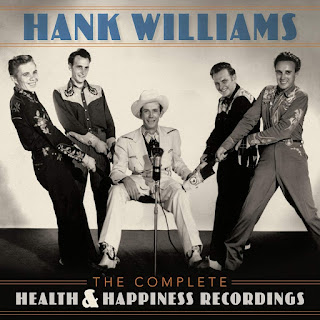 Back on June 14th, the BMG music label released "The Complete Health & Happiness Shows" from legendary country artist Hank Williams. These recordings are released to celebrate the 70th anniversary of these shows and features 49-tracks spread across two CDs and for the first time as a triple vinyl set.

In 1949, Hank Williams was at a pivotal point in his career and by performing on the "Health & Happiness Show," Williams music was placed in living rooms across the country. This made Hank Williams a household name and it produced a number of hit songs like "Lovesick Blues," "You're Gonna Change (Or I'm A Gonna Leave)," "I'm A Long Gone Daddy" and "Wedding Blues." The quality of these recordings is stunning as the Grammy-winning team of Cheryl Pawelski, Colin Escott and Michael Graves did an amazing job producing and mastering this material for this new release.
These shows led Hank Williams to country superstar status in 1950 and are a much welcome addition to the Williams catalog, that already includes an outstanding number of releases. If not only for the historic value, "The Complete Health & Happiness Shows" need to be in your country collection, since it features some of the best recordings of Hank Williams of his 15 year singing career.
Posted by JP's Music Blog