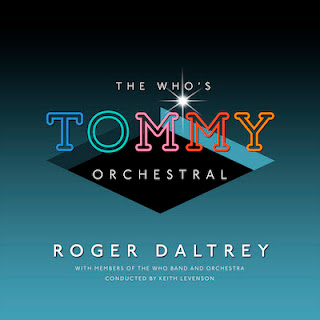 In celebration of the upcoming 50th anniversary of The Who's landmark album "Tommy," lead singer Roger Daltrey went on a U.S. summer tour last year performing the entire rock opera with a full orchestra. Back on June 14th, Polydor/UMe released "The Who's Tommy Orchestral," which was recorded at the site of the original Woodstock, where "Tommy" was performed by The Who in August 1969.

Composer and arranger David Campbell led the orchestra through the 24-song rock opera, as Roger Daltrey's vocals brought it all back home. The rock intensity of "1921" and "Christmas" is supported by a chorus of singers to give the songs that extra boost of energy. The orchestra plays a key role in the production of songs like "Pinball Wizard" and "I'm Free," by giving the music a more classical feel, while members of The Who's touring band provide the tunes their rock vibe. Simon Townshend (brother of The Who's Pete Townshend) sings lead on "Sally Simpson" taking his brother's place, who sang lead on the original track. The show closes with an epic, eight-minute version of "We're Not Gonna Take It," which turned The Who into American legends fifty years ago at the original Woodstock festival.
Since it's release last month, "The Who's Tommy Orchestral" has topped the Billboard Classical Albums charts. The Who will return to the U.S. in September for their Fall tour. For a complete list of shows and to find out more about the new "The Who's Tommy Orchestral" release, please visit thewho.com.
Posted by JP's Music Blog