The Hollywood Stars Relive Their Glory Days In "Sound City" 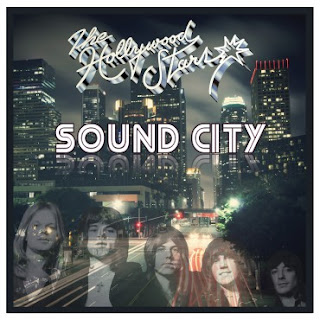 Back in 1973, hard rock was taking over the airwaves, with bands like Led Zeppelin, The Rolling Stones and Deep Purple creating timeless anthems. Producers and record label executives were looking for the next big act to sign and record a hit album, with many of them falling by the wayside. One such producer, Ken Fowley, who had a string of hits in the sixties, assembled a rock band named The Hollywood Stars. They were signed to Columbia records, recorded their debut album and hit the road, performing alongside acts like The Kinks, Iggy Pop and The Ramones. As the management changed at Columbia Records at this time, The Hollywood Stars debut album was eventually shelved.

After the original line-up of The Hollywood Stars disbanded in 1974, a new line-up of the band went in to Sound City Recording Studio in 1976 to record an album of new material. That album was also never released, and the band would eventually disband a couple years later. Now, on August 23rd, Burger Records is preparing to release The Hollywood Stars' "lost album" for the very first time on CD and digitally. The ten track release includes songs that have appeared on compilations or as singles, but now have a home on the band's full-length debut release "Sound City." To celebrate the release of this album, a modern line-up of The Hollywood Stars will regroup for a show at The Whiskey a Go Go in Hollywood, CA on July 18th.
The music on this album definitely has that seventies rock vibe, as you flashback to the classic sounds of "Sunrise On Sunset" and "I Can't Help It." The album also includes the song "Escape," originally written by Alice Cooper, Ken Fowley and Hollywood Stars singer/guitarist Mark Anthony, who also appeared on Alice Cooper's "Welcome To My Nightmare" album. You can't help but fall in love with songs like "All The Kids On The Street" and "Make It To The Party," as The Hollywood Stars had the perfect sound, butnwas just not in the right place at the right time. To find out more about the latest happenings of The Hollywood Stars, please visit their Facebook page at facebook.com/thehollywoodstarsband.
Posted by JP's Music Blog