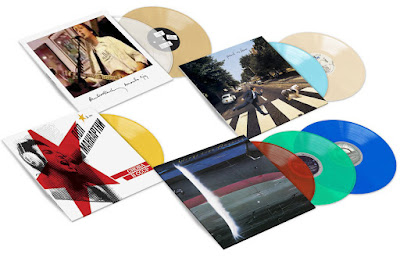 Back on July 12th, MPL, Capitol Records and UMe joined forces to release a decade spanning set of new vinyl LPs from Paul McCartney. It features newly remastered versions of "Wings Over America" (1976), "CHOBA B CCCP" (1988), "Paul Is Live" (1993)" and for the first time in its entirety, the full "Amoeba Gig" performance. All four releases come in a number of different configurations, which includes colored vinyl, black 180-gram vinyl and also on CD.

The gem of this new treasure is the official release of Paul McCartney's performance at Amoeba Records on June 27, 2007. This once-in-a-lifetime performance took place in front of one of McCartney's most intimate crowds of only a few hundred fans, as he performed songs from his most recent release "Memory Almost Full" and of course classics from The Beatles and his own solo career. The sound on this new vinyl release of the "Amoeba Gig" is exceptional. You can feel the deep bass groove of "Drive My Car, before warming up to the wonderful acoustic strumming of "Dance Tonight," "Calico Skies" and "Blackbird." McCartney gets a little emotional when he performs "Here Today," which he dedicates to his former songwriting partner, John Lennon. Even though this was recorded in a record store, the raw power of "Back In The USSR," "I Got A Feeling" and "Get Back" are noticeably striking and will certainly shake your speakers. Plus, to add even more excitement to this new release is a vinyl-only soundcheck recording of "Coming Up."
The other Paul McCartney live solo release in this set is "Paul Is Live," which was remastered at Abby Road Studios for this new vinyl version. It definitely sounds noticeable better than its original 2 CD release from the mid-nineties. The acoustic performances that take up the entire second side of this vinyl set, just lays out beautifully as a perfect unplugged set. The horns on "Magical Mystery Tour" and "Penny Lane" are sharp, but not piercing as the loudness is certainly in check on this new version. The energy of "Lady Madonna" and "Live And Let Die" is also felt, as you crank up the volume. The soundcheck on side four of this double LP set, has never sounded better and is a much welcome addition to the vinyl.
This set of new releases is rounded out by the former Russian only vinyl release of Paul McCartney's "CHOBA B CCCP" album. It features Paul performing covers of some rock and roll standards like "Twenty Flight Rock" and "That's All Right Mama." This new remastered vinyl version sounds stellar and the artwork keeps all the original Russian notes on the back cover. The original Capitol label on the vinyl is also a nice touch, as you can hear Paul's love for performing these classics during a jam session with some British musicians in East Sussex.
The "Wings Over America" triple vinyl release follows its 2013 box set release as part of the Paul McCartney Archive Collection series. It was originally only reissued on CD and now a new triple, colored-LP set takes its proper place as one of Paul McCartney's greatest live albums. This release also includes a copy of the original souvenir poster that came with the original vinyl issue of this album. To find out more about these new releases from the Paul McCartney Archives, please visit paulmccartney.com.
Posted by JP's Music Blog