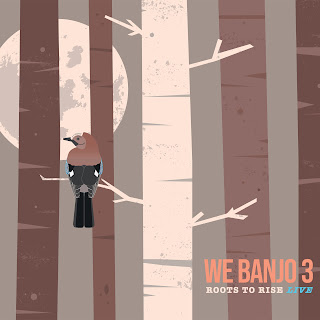 Grassroots band, We Banjo 3 have been on a constant rise in popularity since the release of their debut album "Roots Of The Banjo Tree" back in 2012. Originally from Galway, Ireland, the band has become a staple at bluegrass and folk festivals around the world. We Banjo 3's last studio album "Haven" even topped the Bluegrass Album Charts for three straight weeks just last year and they return once again with only their second full-length live album titled "Roots To Rise Live." It was recorded in February 2019 at The Ark in Ann Arbor, Michigan.

The new release contains fourteen tracks, beginning with the previously unreleased "Shine On," which is an uptempo, swinging gem that is pure Americana gold. They continue with the amazing instrumental "Puncheon Floor," which showcases the band's talents for performing in a live setting. They slow the tempo down for the beautiful melody of "Haven" and "Marry Me Monday." We Banjo 3 will have you singing along to "Little Liza Jane," just like audience, before the song is done. Then, they display the wonderful bluegrass sounds of "Annabelle's Canyon." Another previously unreleased song that the band perform is their version of "John Brown's," which get the crowd into a roar. We Banjo 3 finish up their new live album with covers of the traditional songs "Prettiest Little Girl" and "Good Time Old Time."
We Banjo 3 will be hitting the road on July 19th for an extensive U.S. tour, which also includes a handful of festivals. For a complete list of shows and to find out more about their latest release "Roots To Rise Live," please visit webanjo3.com.
Posted by JP's Music Blog