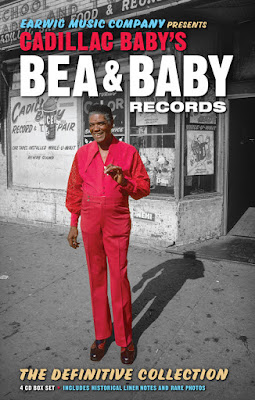 One of the most overlooked music labels to come out of the Chicago blues scene was Bea & Baby Records. They were around from 1959 to 1989, delivering some of the greatest independent blues, gospel, doo-wop and soul music to ever come out of the windy city. The label was led by the one and only Cadillac Baby, who had a knack for finding the diamond in the rough of artists. After the Earwig Music Company purchased the Bea & Baby Records label, Earwig owner Michael Robert Frank felt that this piece of history needed to be told correctly. This began a friendship between Frank and Cadillac Baby, as the two went on to produce a rising hip-hop singer, 3D (Richard Davenport).

After the passing of Cadillac Baby, Frank thought that it was only right to tell the story of Bea & Baby Records by delivering large assortment of what the label had to offer. On August 16th, the Earwig Music Company will release a new 4-CD box set titled "Cadillac Baby's Bea & Baby Records." The set features almost a 100 songs performed by over forty different artists that have passed through the Bea & Baby Records label.
The first disc showcases the early days of the label when it was led by the blues of Eddie Boyd ("I'm Commin' Home" and "Blue Monday Blues") and the doo-wop of The Daylighters ("Mad House Jump" and "You're Breaking My Heart"). This music perfectly summed up the sixties Chicago sound. The heart of the first disc features a 12-minute story about "The Legend Of Cadillac Baby" told by Cadillac Baby, on the "Blues Before Sunshine" radio show. As artists like Little Mac and Detroit Junior burn up the remainder of the first disc with their up-tempo, guitar boogie blues, you will simply find yourself lost in the world of beautiful forgotten music.
Disc two picks up with the slide guitar blues of Hound Dog Taylor ("My Baby Is Coming Home" and "Take Five"), before the mellow sounds of Phil Sampson takes you down to lonesome street with "It's So Hard." The big vocals of Lee Jackson and the soulfulness of Little Mac showcase the immerse talent that the Bea & Baby Records label was promoting. Willie Hudson closes out the second disc with the stellar surf guitar-like instrumental "Red Lips."
The blues continues to be the highlight of the set with a couple of Christmas songs featuring The Cadillac Baby Specials. You can't help but be blown away by the burning live recordings of Little Mack Simmons' covers of "I'm Your Hoochie Coochie Man" and "I'm Tore Down." You'll hear the seventies funk seeping into the blues of Arelean Brown's "Hello Baby," before Sunnyland Slim, Homesick James and Andrew "Blueblood" McMahon keep their finger on the pulse of Chicago blues in the early seventies.
After showcasing a couple of hip-hop tracks from 3D, disc three jumps back to the sixties with early acoustic blues of Sleepy John Estes & Hammie Nixon ("Cadillac Baby Passed So Fast" and "Lay My Burden Down"). Disc four also features the lovely gospel vocals of The Gloryaires, Eddie Dean & The Biblical Aires and The Norfolk Singers. The set finally wraps up with Cadillac Baby explaining to interviewer Jim O'Neal that "Blues Is My Soul," as Cadillac Baby was the heart of Bea & Baby Records.