Legendary heavy metal band, Iron Maiden have been a staple on the concert scene for well-over forty years. Since the band's humble beginnings back in the late-seventies in England, Iron Maiden has grown into an enormous live act that has become a must see for fans both new and old. It has been almost a decade since Iron Maiden played in Hartford (as part of Ozzfest) and on Saturday night, they broke that streak performing at the Xfinity Theatre as one of the stops on their "Legacy Of The Beast Tour 2019."

The seats were filled and the lawn was packed awaiting the heavy metal giants to take the stage as anticipation was high. After the completion of their introductory music, "Doctor, Doctor" by the band UFO, old British war footage played on the giant screens. For well-known Iron Maiden fans, this signaled the beginning of their war anthem, "Aces High," which features a huge World War II plane flying over the band during their performance of the song.
Iron Maiden sounded as youthful as ever, ripping through classics like "2 Minutes To Midnight" and "The Trooper." The band's mascot, "Eddie" walked out on stage during "The Trooper" for a sword fight with lead singer Bruce Dickinson, as Dickinson displayed his fencing skills on the ten foot tall "Eddie."
All throughout the night, the audience was in perfect unison with the band, pumping their fists to "Revelations" and shouting the chorus of "Fear Of The Dark." Iron Maiden's live shows have been widely hailed as a spectacle to behold. The amazing theatrics during their epic song "Sign Of The Cross" was certainly one of the evening's highlights. 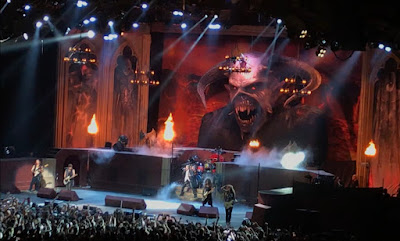 During their classic tale of the "Flight Of Icarus," Dickinson would shoot out flames from his backpack flame thrower, as a giant Icarus figure flew in the background. The band was in stellar form all night, as the members still seemed to enjoy performing in this live setting.
Iron Maiden's main set closed with one of the band's oldest songs, "Iron Maiden," to which they got their name from, as a giant demon arose behind the drummer. The crowd sang along to every word, as the song's tempo was certainly sped up to match the adrenaline of the audience.
The encore would consist of three songs, all of which have become favorites to their fans, as Dickinson continued his theatrics during "The Evil That Men Do" and "Hallowed Be Thy Name." As the well-known rhythm and guitar riff of "Run To The Hills" signaled the night's final song, everyone sang along to the song's chorus, almost drowning out Dickinson's own vocals. So, whether it was your first Iron Maiden show or your twentieth, the performance that was given last Saturday night will never be forgotten by the band's faithful followers.

Setlist: Aces High, Where Eagles Dare, 2 Minutes To Midnight, The Clansman, The Trooper, Revelations, For The Greater Good Of God, The Wicker Man, Sign Of The Cross, Flight Of Icarus, Fear Of The Dark, Number Of The Beast, Iron Maiden
Encore: The Evil That Men Do, Hallowed Be Thy Name, Run To The Hills
Posted by JP's Music Blog