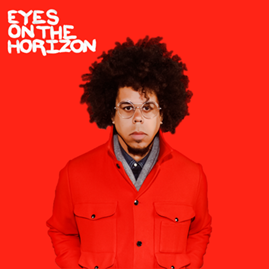 On September 6th, saxophonist Jake Clemons will be releasing his sophomore effort "Eyes On The Horizon." Clemons may be best known as a member of Bruce Springsteen And The E Street Band, but he is also a very talented singer/songwriter. Clemons new album was co-produced by Jake Hull and mixed by the legendary Eddie Kramer (Jimi Hendrix, Led Zeppelin, The Rolling Stones).

His new ten song release kicks off with the passion of "Swan Song," as Clemons sings this song with strength and justice about changing the mistakes of the past. One of the album's first two singles is the song "Consumption," which definitely demands your attention, as Clemons' politically charged words match the work of guest guitarist Tom Morello (Rage Against The Machine). Jake Clemons takes a step back from the hard rock of the first two numbers for the gentle melodies of "Mom Deserves Better" and "Nothing Left," which allows you to fully appreciate his singing. The album's second single is a cover of Leonard Cohen's song "Democracy," injected with a shot of adrenaline.
Jake Clemons wraps up his new album with the wonderful island vibe of "Eyes On The Horizon," which can certainly be a strong contender for his next single with the song's infectious groove along with the quiet piano ballad of "Goodnight." Jack Clemons will be hitting the road following the release of this new album. For a complete list of shows and to find out more about his new album "Eyes On The Horizon," please visit jakeclemons.com.
Posted by JP's Music Blog