Musician/Composer Bryan Beller Shows Us "Scenes From The Flood" 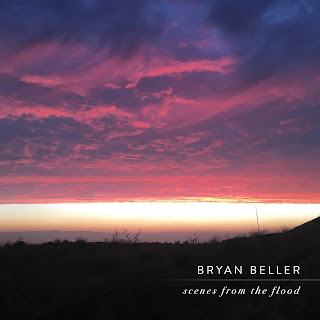 On September 13th, bassist/composer Bryan Beller (The Aristocrats, Joe Satriani) is preparing to release a new double-concept album titled "Scenes From The Flood." It includes a load of guest musicians including guitarists Joe Satriani, John Petrucci and Mike Keneally, along with many others. Beller examines the themes of ambition, loss, hope and disillusionment through his new 18-song, 88-minute release.

The album begins with the sweet, gentle flow of piano in the song "The Souring Of Three & Seventeen," before the music takes off with the sonic trip of "Volunteer State," led by the guitar work of Joe Satriani. The energy continues to flow through the funk infused rhythm of "Everything Is Nothing," while spoken work lyrics make you examine the rules of life. The album is broken down into four parts, with the first one ending with the heavy metal assault of "Steiner In Ellipses."
Beller's new album features many progressive rock gems, like the nearly seven-minute

atmospheric rock of "Always Worth It" and the pounding juggernaut of "The Storm." Part two closes with the experimental chords of "The Flood," right before the jazz fusion of "Bunkistan" takes the mood and melody in a different direction, showcases the many songwriting talents of Bryan Beller. Two of the album's highlights, are also the album's two longest tracks, the build up of "Angles & Exits," which continues to gain tempo as the song progresses. The other outstanding track, is the exciting, energetic blast of "World Class," which includes elements of music from around the world in this epic piece, led by the guitar work of John Petrucci.
Bryan Beller is currently on tour with his band The Aristrocrats. For a complete list of shows and to find out more about his new solo album "Scenes From The Flood," please visit bryanbeller.com.