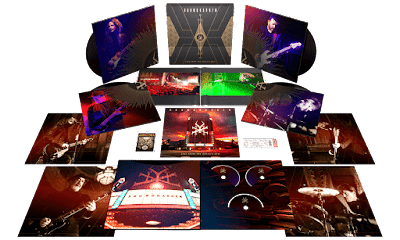 The legendary alternative metal band, Soundgarden have released their first album since the death of front man Chris Cornell in 2017. It features the the band's full live performance from February 17, 2013 at the Wiltern Theater in Los Angeles, CA. The show was originally filmed for an episode of the PBS series "Live From The Artists Den" and signaled the return of the band, as they used this shows to close out their three year reunion tour, following a twelve year absence. This epic performance was released on July 26th through UMe, in association with Artists Den and the Chris Cornell Estate.

The 29-track release covers the band's entire career, as they perform songs from their debut album "Ultramega OK" all the way up until their last studio album "King Animal." There are also a few, very rare live gems included like Soundgarden's first ever live performance of the song "Blind Dog" from "The Basketball Diaries" soundtrack.
The band plays it safe and heavy at the beginning of their live show, blasting through favorites like "My Wave" and "Jesus Christ Posse." Their new songs ("Taree" and "By Crooked Steps") from the "King Animal" album fit in perfectly next to classics like "Spoonman" and "Drawing Flies," as they begin to loosen up and perform with reckless abandonment. When Cornell starts talking with the audience is when you feel the full connection that the band had with their fans. First, he explains the meaning behind their song "Black Saturday," then has fun making fun of the band's performance for PBS' donation process.
This new live album proves once and for all that Soundgarden were the kings of live performances, as proven in the band's blistering run through of songs like "Rusty Cage" and "Ty Cobb." They are also the masters of "grunge," as displayed in the grinding rhythm of "New Damage" and "Outshined." The show finishes with an amazing ten minute sonic blast of the Soundgarden epic "Slaves And Bulldozers," followed by four minutes of feedback that all their fans have come to know closes each and every show.
Soundgarden "Live From The Artists Den" was released on a number of different formats, including a 2-CD set, a 4-LP vinyl set, Blu-ray and a limited edition super deluxe box set, which includes everything, plus a 40-page photo book. To find out more about this exceptional new release, please visit artistsden.com/soundgarden.
Posted by JP's Music Blog