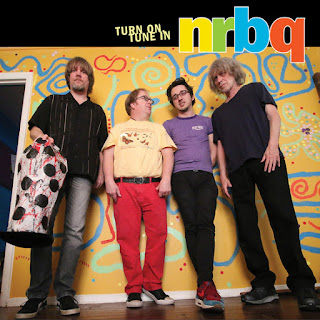 Arriving on September 6th, via Omnivore Recordings, is a new live album from the legendary rock band NRBQ. Their new release titled "Turn On Tune In" features two of the band's exclusive shows on CD & DVD. NRBQ are also currently on tour, with some upcoming stops in Connecticut, New York, Rhode Island and New Hampshire.

The new live release includes the band's six-song performance on November 30, 2015 at The Loft in Washington, D.C., recorded by SiriusXM. The short set includes a couple of cover songs ("Don't Ever Change" and "Wilderness Road"), along with a version of "Step Aside" that pays tribute to one of the band's founding members, Steve Ferguson.
The second half of the CD includes the band's lively performance at Monty Hall in Jersey City, NJ on August 20, 2017. The entire performance was also captured on video and is included on the DVD. As you watch the band's performance at this small venue, they begin to heat things up with their musical skills on songs like "Nature's Gonna Pay You Back" and "Tragic Magic." It seems like only a handful of cameras are used to record NRBQ's live show, as many of the shots are of the complete band with not many close-ups. This show also showcases more fan favorites like "It Feels Good" and "That's Neat, That's Nice," as well as the band's attempt of The Beach Boys' classic "Don't Worry Baby," which they pull of with flying colors. The show closes with the swinging, boogie-woogie rhythm of "RC Cola And A Moon Pie," as NRBQ leave all their energy on the stage. To find out more about NRBQ, as well as their upcoming love shows and their new live album "Turn On Tune In," please visit their Facebook page at facebook.com/NRBQHeadquarters.
Posted by JP's Music Blog

Loved it! I thoroughly enjoyed this post. Keep it up.

I am the marketing manager of a book publishing company. Would you love to become our partner?

Please shoot me an email at mwhitegeek@gmail.com so that we will discuss about it.

Keep on being awesome!