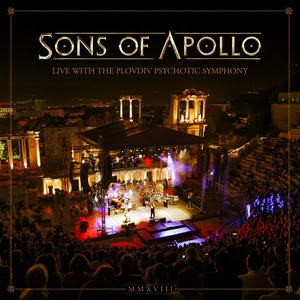 The progressive metal supergroup, Sons of Apollo return on August 30th with their first live album titled "Live With The Plovdiv Psychotic Symphony." The new 3CD/DVD/Blu-ray captured the band on their most recent tour of Bulgaria, performing at the Ancient Roman Theatre in Plovdiv in front of a full orchestra and choir. The set features every song from their debut album "Psychotic Symphony," along with a boat-load of cover songs that Sons Of Apollo add their own special touch on.

The show begins just like their studio album with the powerfully epic modern prog-metal masterpiece "God Of Sun," as you are reintroduced to this musical juggernaut. They continue with the grinding rhythm of "Signs Of The Time" and "Divine Addiction," as keyboardist Derek Sherinian and bassist Billy Sheehan trade solos. Guitarist Ron "Bumblefoot" Thal leads the band through their first cover of the evening, the "That Metal Show Theme," before reaching their reaching an intense cover of Dream Theater's "Just Let Me Breathe." Sandwiched between stellar solos by Billy Sheehan and vocalist Jeff Scott Sotos is another Sons Of Apollo original "Lost In Oblivion," before the band come together to take on "The Pink Panther Theme."
The second CD of the set showcases the Sons Of Apollo as musical chameleons, as they perform covers of Led Zeppelin's "Kashmir," Aerosmith's "Dream On" and Pink Floyd's "Comfortably Numb." Not only does the band do an outstanding job on each of the these songs, but the symphony also add the perfect touch of perfection to give the songs that extra amazing classical grace. Sons Of Apollo wrap up the second disc with a couple of Dream Theater classics ("Hell's Kitchen" and "Lines In The Sand"), which highlights the amazing work of Derek Sherinian on the keyboards and the professional cohesiveness of the band.
The show closes with guitarist Ron "Bumblefoot" Thal playing to the audience during his solo spot, before the rest of the band join him for the Van Halen cover "And The Cradle Will Rock." The screams of "Coming Home" display the final statement by the Sons Of Apollo on this, their first live album, which will not disappoint any fan of the group or that matter a fan of hard rock music. To find out more about the new Sons Of Apollo release "Live With The Plovdiv Psychotic Symphony," please visit facebook.com/SonsOfApollo1.
Posted by JP's Music Blog