For the past twenty years, you could not help but hear a hit song on the radio from the rock bands Train and The Goo Goo Dolls. This summer to two acts joined forces for a hits filled tour that pulled into the Mohegan Sun arena last Sunday night. 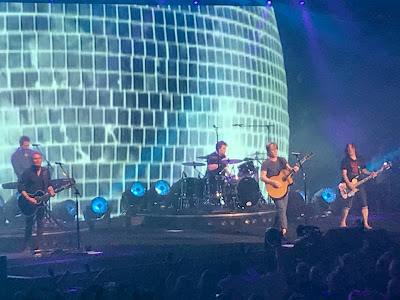 The Goo Goo Dolls came out rocking to start the evening off with a pair of fan favorites, "Stay With You" and "Big Machine," before delivering their 1998 mega hit single "Slide." The fun-fueled energy continues with giant balloons bouncing around the arena as The Goo Goo Dolls performing the associated song "Black Balloons." Bassist Robby Takac took over the lead vocals from singer/guitarist and fellow original member Johnny Rezenik for the punk-like rendition of "Free Of Me." Hands were swinging in the air for the modern pop song "So Alive," as Rezenik showed off his newly finger painted guitar by his young daughters. After telling us about the origins of "Name," Rezenik began the song acoustically, before the rest of the band joined in. The Goo Goo Dolls also have a new album on the horizon, as they perform the album's title song, "Miracle Pill," before Takac takes over the singing duties once again for "Bringing On The Light." The band wrapped up their hour long set with their platinum selling single "Iris" and the fan favorite "Broadway." 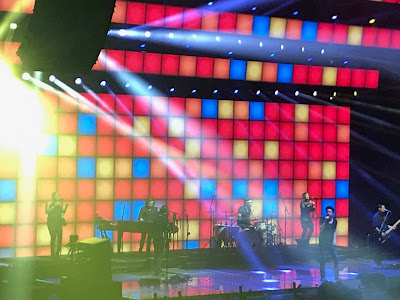 If The Goo Goo Dolls' performance was any indication of what was to come from Train, then the audience would be in for one heck of treat. As the sounds of trains pulling into the station rang throughout the arena, Pat Monahan leads his latest version of Train through a hits-filled set, beginning with "Calling All Angels," "50 Ways To Say Goodbye" and "Is It Love." Train bring out the beach balls to keep the party going with "Save Me, San Francisco," as shouts of "Oh hell no," were yelled by the audience, as instructed by the lead singer.
Opening act Allen Stone re-introduced himself by entering the stage singing the chorus of "Empire State Of Mind," before Stone and Monahan would duet on the playful song "Bruises." Train have always been a musical chameleon, as they perform amazing covers of Tom Petty's "American Girl" and Queen's "Under Pressure." Pat Monahan would explain the origin behind the emotional ballad "When I Look To The Sky," as a homage to everyone who has lost someone special to them.
Train would pick the energy up once again with a trio of their mega-hits including "Drive By," "Hey, Soul Sister" and "Play That Song," before thanking the audience for a great night. But, instead of exiting the stage for their encore, guitarist Luis Maldonado would rip into the opening chords of the Led Zeppelin classic "Heartbreaker." Train closed out the evening with their first number one single "Drops Of Jupiter," as fountains of sparks and confetti filled the arena. Whether you are a fan of Train or The Goo Goo Dolls, both bands delivered sets that pleased both long-time fans and first timers.
Posted by JP's Music Blog