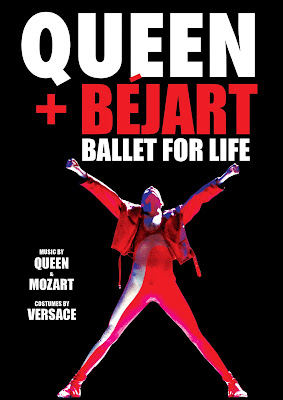 On September 6th, Eagle Vision released a new DVD titled "Queen + Bajart: Ballet For Life." It features a brand new documentary surrounding this iconic, one-of-a-king ballet that uses the music of Queen and Mozart to pay homage to the people that have "died too early." The release of this new DVD co-insides with the annual "Freddie For A Day" events, which marks the birthday of the late, great Freddie Mercury.

The 90-minute documentary includes new interview segments from Queen members Brian May and Roger Taylor, along with dancers Gil Roman, Wayne Sleep and choreographer Arlene Phillips. Documentary director Lynne Wake uses classic clips of Queen, mixed with archival footage of choreographer Maurice Bejart, who created this exceptional ballet that is still being perform over twenty years later.
May and Taylor sound so humble in their interview segments that Bejart would even consider the music of Queen to be used in a ballet. Plus Freddie Mercury was such a huge fan of the ballet, that he would try and imitate their movements on stage when Queen performed live. It is also  great seeing the behind the scenes footage of the creation and how hard the dancers worked to make this one of the pinnacle shows of their career. A highlight of the documentary for me was the live performance from the remaining members of Queen (including bassist John Deacon in his last ever performance before retiring from music), with Elton John at the opening of this ballet in 1997.
Bonus features on this DVD includes a complete filmed performance from the Salle Metropole, Lausanne in 1997 and a "Making Of" film from when the ballet premiered. Even though the ballet was not filmed in high definition, the quality and camera work is still excellent enough to capture the essence of the performance. If you are a fan of Queen's music, this is a must see DVD that will having you appreciating their music in a different artistic light and also shows how creative Maurice Bejart was in his visual use of their music. To find out more about "Queen + Bejart: Ballet For Life," please visit queenonline.com.
Posted by JP's Music Blog