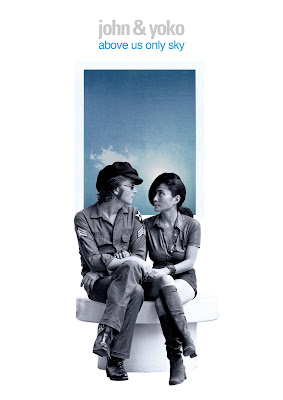 On September 13th, Eagle Vision released a brand new documentary titled "Above Us Only Sky." It tells the story of the creation of John Lennon's iconic solo album "Imagine." This new film, directed by Emmy Award Winner Michael Epstein, uses loads of unseen footage that was shot during the recording of the album, along with home video footage to give fans the ultimate insight into the life and creation of John Lennon's music.

The nearly two-hour tale features tons of rehearsal and studio recording footage that has never been seen before. In one moment, John is teaching the musicians to play the song, "How Do You Sleep?," as he has the entire melody already planned out in his head. Seeing George Harrison at these sessions certainly brings the excitement up to another level. New interviews with musicians Klaus Voormann, Alan White and Jim Keltner give personal insight into the recording sessions for the "Imagine" album.
Julian Lennon remembers that it was not very much fun for him in the studio, as a kid, that he would much prefer to run around the grounds of their London estate, Tittenhurst Park. Seeing footage of John, Julian and Yoko in a boat on the pond is a beautiful touch, giving us a glimpse into their family life. Let's not forget about the music, listening to John's vocals only on "Jealous Guy" reminds us of how pure and real his voice was, even in the most delicate situations. One of the highlights of the film is seeing the creation of the song "Imagine," where the assumption of "less is more" made this song into in an anthem for peace for all eternity.
The documentary also shows us footage of John and Yoko in New York City, where they would go to record overdubs and mix the album. They fell in love with the city so much, that they never went back to Tittenhurst Park. The way that director Michael Epstein uses historical events to show the reasons and meaning behind many of Lennon's songs on this album is definitely eye-opening. The relation between the Vietnam War and Civil Rights laid the ground work for songs like "I Don't Want To Be A Soldier" and "Gimmie Some Truth."
The new DVD and Blu-ray release also includes bonus rare, unreleased studio mixes of "How Do You Sleep?" and "Oh My Love," along with footage of John and Yoko in the Bahamas. I personally enjoy hearing John Lennon's idea for wanting to record a Christmas song that will get played every year forever and also the reason behind the "War Is Over" campaign. To find out more about this new stunning documentary "Above Us Only Sky," please visit johnlennon.com.
Posted by JP's Music Blog