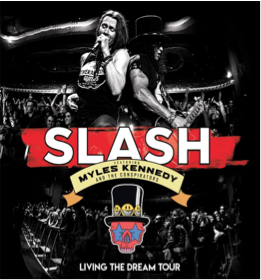 On September 20th, Eagle Vision will release the brand new, highly anticipated live album from Slash featuring Myles Kennedy and The Conspirators. This new package titled "Living The Dream Tour" will be available on CD, DVD, Blu-ray and on vinyl. During his break from touring with Guns 'n' Roses, Slash decided to revisit his solo catalog with a European tour earlier this year. This new video/audio release captures Slash with Myles Kennedy and The Conspirators live at the famous Hammersmith Apollo in London on February 20, 2019.

This shows covers all four of Slash's solo releases, as Myles Kennedy handles the vocals for most of the night, bassist Todd Kerns handles lead vocals with a dash of punk energy on "We're All Gonna Die" and "Doctor Alibi." The show was shot exceptionally well, covering every angle and every member of the band. Slash stays mostly stage left throughout the performance, without much movement, unless the song demanded and electrifying guitar solo, then he would take center stage to show off his  guitar skills.
The video shows that the venue is packed, as fans know every song, especially the one, lone Guns 'n' Roses' song, "Nightrain," in which Slash takes an extended solo. He also puts his guitar talents on display during his spotlight solo of "World On Fire," as his fingers never stop moving up and down the fret board. Myles also shines with his amazing vocals during the high powered anthems of "Halo" and "Mind Your Manners." He also knows how to control the crowd with his singing and his interaction with the audience. The secret weapon of this show is definitely The Conspirators, who give the songs their extra boost of energy and edginess, as they rock the hell out of each and every note.
This shows is exactly what rock and roll is all about, as each member of the band and the audience are enjoying themselves, letting loose and having a good time. Also, the quality and clarity of this film is amazing. You will certainly see how hard this band works on stage to deliver and outstanding show. The DVD and the Blu-ray both include a bonus feature, "Live In London," which is short, behind the scenes, mini-documentary that includes interviews with Slash and Myles Kennedy, as they discuss the tour and their shows. To find out more about this new live album from Slash featuring Myles Kennedy and The Conspirators "Living The Dream Tour," please visit slashonline.com/livingthedreamtour.
Posted by JP's Music Blog