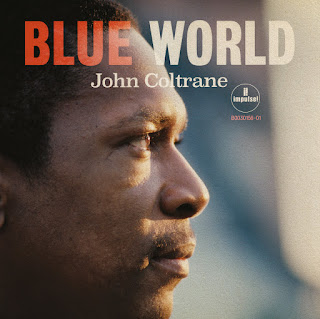 On September 27th, the Impulse! and UMe music labels teamed up to release a new, previously unreleased, album from the legendary jazz great John Coltrane and his Classic Quartet. The new album titled "Blue World" features new recordings of some famous Coltrane classics, performed by John Coltrane, Jimmy Garrison, Elvin Jones and McCoy Tyner. The original idea behind the album was for Coltrane and his band to record songs for the Canadian film "Le chat dans le sac." The director Gilles Groulx only used about ten minutes of the studio sessions, as the rest of the recordings laid dormant, until now.

The album has been remastered from the original analog tapes and just simply sounds amazing, especially on vinyl. There is just something about dropping the needle on that groove of a jazz LP and hearing the wonderful, warming tones of jazz music that is unlike anything else.
This Classic Quartet were on a creative high, just joining the Impulse! label in 1961, jumping at the opportunity to go into the studio at every opportunity. During these 1964 sessions, Coltrane revisited songs from his Atlantic Records albums "Giant Steps" and "Coltrane Jazz" with a renewed sense of purpose. The new "Blue World" album features multiple takes of songs like "Naima" and "Village Blues," but instead of feeling redundant, each version feels like getting reacquainted with an old friend.

The wonderful, but subtle, swing that Coltrane placed into his music is certainly heard here in the songs "Village Blues - Take 2" and "Traneing In." The Quartet sound locked on the graceful delivery of "Naima - Take 1," while "Like Sonny" is three minutes of pure joy, as Coltrane leads the way on this playful, upbeat song. You will no doubt run through this album a number of times, looking for the subtle changes in the different take within the songs "Naima" and "Village Blues." To find out more about the new John Coltrane album "Blue World," please visit johncoltrane.com.
Posted by JP's Music Blog