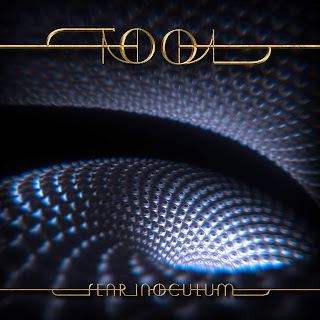 It has certainly been a long wait for Tool fans (13 years), almost as long as Guns 'n' Roses fans had to wait (15 years) for a new studio album. Unlike GnR fans, Tool fans can all rejoice at this epic, amazing release, that is filled with Tool's classic sound that has defined these masters of hard rock/heavy metal music. On August 30th, Tool finally released their fifth studio album titled "Fear Inoculum" through RCA Records.
Tool were never ones to come blasting music right in your face to showcase their hard rock edge. They would rather take their time, bring you on a sonic journey before flexing their metal muscle, while also displaying their wonderful creativity as shown on the opening track "Fear Inoculum." If you do not listen to this album with a pair of high quality headphones on, then you will miss the little rhythmic interludes and quieter, atmospheric sections of their well-crafted songs. Tool continue to lead you down their musical path with the nearly twelve-minute classic sounding "Pneuma," which will having you comparing it to early tunes by the band.

In between, the epic songs, are shorter musical instrumentals that stretch Tool's musical landscape even further, as they introduce a flowing, ambient soundscape with "Litanie contre la Peur" and also a collage of sound experiments during "Legion Inoculant." Sandwiched between these two numbers is the bass driven, pounding rhythm of "Invincible," which brings the band into the progressive metal territory with it's heavy sound, which only keeps you wanting more from this band. Tool close out their new album with the electronic rhythmic instrumental "Chocolate Chip Trip," the aggressive assault of "7empst," which has the band firing on all cylinders and then finally the screeching radio jungle sound of "Mockingbeat."
Tool will be heading out on tour this fall, beginning with an appearance at the Aftershock Festival in Sacramento, CA. For a complete list of shows and to find out more about their new album "Fear Inoculum," please visit toolband.com.
Posted by JP's Music Blog