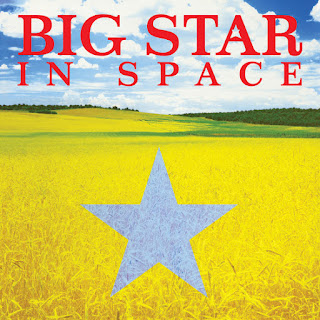 On October 25th, Omnivore Recordings will reissue the final studio album from Big Star on CD (with bonus tracks) and on translucent blue vinyl. The album "In Space" was originally released in 2005, it was their first studio recording in thirty years, after reforming in the mid-nineties. It features twelve tracks (ten originals and two covers) that display a very power pop rock sound, which critics did not care for at the time of its release, but feels more nostalgic and addictive this second time around.

Songs like "Best Chance" and "February's Quiet" captures Big Star's classic sound, in a more polished setting, while their cover of The Olympics' "Mine Exclusively" is where the pulse of the album lies. Alex Chilton and Big Star try to bring that energy into "A Whole New Thing" and "Do You Wanna Make It," but the band's early raw rock sound was gone, as the band displayed a more mature sound on this final album.
The six bonus tracks that appear on the new CD release of "In Space" features the rare, out-of-print "Hot Thing," along with demos and early mixes of the songs "Dony" and "February's Quiet." The set closes with a sweet Acapella version of "Turn Back The Sun," which sounds like a modern version of The Beach Boys. Also included in this set a 16-page booklet filled with new essays from surviving band members, as well as from co-producer/engineer Jeff Powell. To find out more about this new reissue of Big Star's "In Space" album, please visit omnivorerecordings.com.
Posted by JP's Music Blog