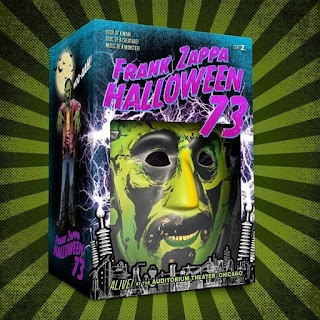 Just in time for Halloween, UMe in association with Zappa Records released two complete shows from Frank Zappa, which were recorded on October 31, 1973. Halloween was Frank Zappa's favorite holiday and every year he performed a live show (or two). This specific year, he performed two shows at the Auditorium Theater in Chicago with a fairly new band of musicians, which are introduced to the audience at the beginning of each show. For the first time, both shows where released on October 25th in their entirety as a four-disc set, that also included a full Frank Zappa costume with a Zappa Frankenstein mask and gloves.

As you begin to listen to these shows, you will instantly notice how great they sound, even after being recorded over 45 years ago. Frank's voice is so clear and up-front, even though the shows are more about the music, than the in-between banter with the audience. Some of the songs overlap into both shows ("Pygmy Twylyte," "Cheepnis" and "Penguin In Bondage"), but each show feels like its own special experience, as no two songs are performed exactly the same way.
If you need an introduction to the live musical world of Frank Zappa, then this release should be first on your list. Zappa's band (although fairly new) sounds loose, but very in-sync together during the jams of "Don't You Ever Wash That Thing?" and "Montana." The highlight of the first show, has to be the nearly twenty-minute performance of "Dupree's Paradise," which at times sounds liked controlled chaos and then very jazzy at other times.
The second show begins with the requested track "Cosmik Debris," as Frank tries to give the audience a different experience than the first show, but their knowledge of songs is limited. Both shows feature the song "Dickie's Such An Asshole," which may be the only time that Zappa and his band get political on this fun night. The second show closes with an incredible ten-plus minute blast jam of energy during "Inca Nights" and the classic medley of "Mr. Green Jeans/King Kong/Chunga's Revenge," which puts a perfect close to Halloween night.
This new release also includes (for the first time) an entire disc of rehearsals performed on October 20 and 21, 1973. The songs on this disc showcase the wonderful musicianship of the band during these rehearsals. As you compare them to the live versions, the extra energy that the band receives from the audience allows for a more exciting and looser flow to the songs. It's a great addition hearing the band discuss and work through the songs "Inca Roads," "Father O'blivion" and "Cosmic Debris," as they flow through the music so cleanly performing them live on stage.
With this being only the second Halloween release ("Halloween '77" was released in 2017) and Frank Zappa introducing a fairly new line-up during these shows, this has to be one of the top live releases in the Frank Zappa catalog. With an endless vault of material, I hope that UMe and Zappa Records continue to release these exceptional quality releases. Keep your eyes peeled for the upcoming 50th anniversary box set of one of Zappa's most popular albums "Hot Rats" to arrive in December. To find out more about Frank Zappa's new "Halloween 73" box set, please visit zappa.com.
Posted by JP's Music Blog