Fifty Years Later, Frank Sinatra Still Has It Going On "My Way" 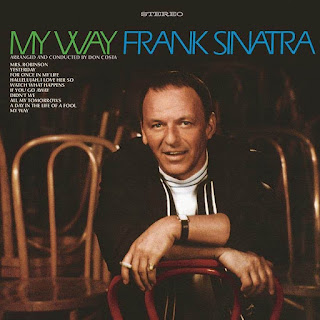 One of the most popular songs in the Frank Sinatra catalog is his signature tune, "My Way," which reached number 2 on the Easy Listening charts in the U.S. and stayed on the U.K. singles chart for a record 75 weeks. The song begins side two of Sinatra's 1969 album "My Way," which reached the #2 position on the U.K. album charts. In celebration of the 50th anniversary of that timeless album, Universal Music Enterprises/Captiol Records, in association with Frank Sinatra Enterprises has reissued the album on a limited edition translucent green color vinyl and also on CD with four bonus tracks.

The "My Way" album features Frank Sinatra performing his own versions of pop classics, including songs by The Beatles ("Yesterday"), Simon & Garfunkel ("Mrs. Robinson") and Ray Charles ("Hallelujah I Love Her So"). He certainly did things his way on this album, as Sinatra (with the help of composer Don Costa) took these well known lyrics and put a different spin on the melody to add his own signature style to the songs. These songs still sound timeless (especially on vinyl) even after fifty years. Sinatra's voice is so warming on the ballads "Didn't We" and "If You Go Away," that you can feel his passion for these performances.

The four bonus tracks included on the new CD release featured two new versions of the song "My Way." One version is sung as a duet with Willie Nelson (which fits each other's musical style perfectly) and the other version is sung with Luciano Pavarotti, which doesn't have quite the same matching appeal. There are also two live version of the song "My Way" performed at two different eras of Frank Sinatra's career. While the original song "My Way" was only recorded in one take, I wish that some of the sessions of the other songs may have been included in this set as bonus songs to make this a more monumental release.
Also available for the first time is a new Frank Sinatra compilation titled "Sinatra Sings Alan & Marilyn Bergman." It features songs written by the famous songwriting duo and sung by Frank Sinatra at different points in his career. The new release also features two songs (as bonus tracks) that have never been previously released, "Leave It All To Me" and "How Do You Keep The Music Playing?." To find out more about these two new great anniversary releases, please visit sinatra.com.
Posted by JP's Music Blog