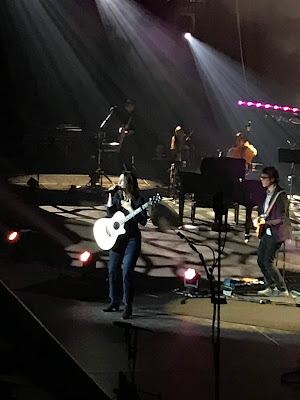 American recording artist Sara Bareilles is in the midst of her first U.S. tour in five years. She has certainly kept busy, during that time away from the road, writing and starring in her very first Broadway play "Waitress" and also writing and recording a brand new studio album "Amidst The Chaos" (her sixth studio album). With so much music material under her belt, Bareilles poured as much of her music as she could into her 21-song, two hour set last Saturday night at the Mohegan Sun arena.

As Sara Bareilles and her 7-piece strolled on stage to take their places, her show began with a short A capella piece, "Orpheus (Prologue)," followed by the thunderous rhythm of her hit single "Fire." Bareilles was very well-spoken with the crowd, cracking jokes and even feeling genuinely overwhelmed with the response she received from the packed arena. Her voice was perfect throughout the night, as she ran through favorites like "I Choose You" and "Love Song."
Sara invited opening act Emily King to duet with her on the pop song "If I Can't Have You," which Emily also sings on Bareilles' new album. After the beautiful ballad "Miss Simone," Sara gave the audience a glimpse into the world of her Broadway show "Waitress" with a short four-song suite ("What's Inside," "You Matter To Me," "Bad Idea"). The final song of the suite was the touching, emotional ballad "She Used To Be Mine," which Sara sung solo playing just the piano.
She wowed the audience once again with her amazing vocal performance of "No Such Thing feat. Satellite Call," as the room lit up with cell phone lights. Sara Bareilles closed out her set with a couple of her biggest and most well-known hits "King Of Anything" and Brave," as the audience sang along, before returning to beautiful song "Orpheus."
After a very short break, Sara and her band took to the stage one last time for the two-song encore of "Gravity" and "Saint Honesty," as pages feel from ceiling, signaling the close of the evening. Feeling blessed that she is doing what she loves, Sara Bareilles once again overwhelmed and thanked her fans for an amazing night of music.

Setlist: Orpheus (Prologue), Fire, Poetry By Dead Men, Eyes On You, I Choose You, Love Song, Armor, If I Can't Have You, Miss Simone, What's Inside, You Matter To Me, Bad Idea, She Used To Be Mine, Uncharted, No Such Thing/Satellite Call, Let It Rain, King Of Anything, Brave, Orpheus
Encore: Gravity, Saint Honesty
Posted by JP's Music Blog