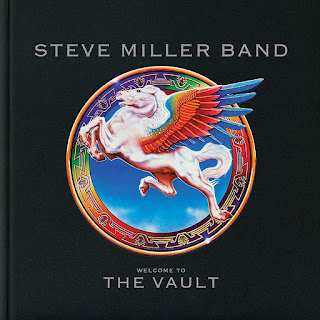 Let me start by saying, "Welcome To The Vault" of the Steve Miller Band with his latest multi-disc set that includes loads of unreleased live versions and outtakes from throughout his career. This new 3 CD/DVD set was released on October 11th, through UMe and comes housed in a beautiful hardbound book with tons of unpublished photos and a brand new essay from Rolling Stones senior editor David Fricke.

The three compact discs don't necessarily go in chronological order, but the songs that are featured on each disc were recorded around the same time period. The first disc feels very "jammy" with live versions of "Blues With A Feeling" and "Super Shuffle" blasting past the nine-minute mark. There is even an alternative version of "Jackson-Kent Blues," which runs over eight minutes. Some of the musical gems featured on this first disc is a sweet acoustic version of "Kow Kow Calculator" and a blistering live version of "Crossroads."
The second disc dives more into the band's seventies studio work, with multiple versions of songs like "Space Cowboy" and "Rock'n Me," but when Miller brings on the blues is when he grabs hold of your soul. His versions of "The Lovin' Cup" and "Killing Floor" are simply timeless, as well as the groove on "Freight Train Blues." On the flip-side, it is also great hearing alternative versions of songs like "True Fine Love" and "The Stake," which has become part of classic rock's DNA.
Disc three begins with Steve Miller performing with Les Paul on "I Wanna Be Loved," which sets you up for what's to come on this third disc. The Steve Miller Band's "Fly Like An Eagle" album is one of the best-selling albums of all time and this part of the set gives you an alternate look at the songs on this album, as well as his other platnium selling masterpiece "Book Of Dreams." Miller includes many rare, unheard takes of songs from both these albums. Hearing early versions of "Jet Airliner" and "Swingtown" give us a little insight into the creative process. The set wraps up with two versions of T. Bone Walker's song "Lollie Lou." One version was performed by Walker himself at the Miller household in 1951, the other version was performed live by the Steve Miller Band in 2016, featuring guest guitarist Jimmie Vaughn. There isn't anything in this set from the Steve Miller Band's late-eighties/early nineties albums on this release, so I hope that another "vault" release is in the works cover this period of the band's work. 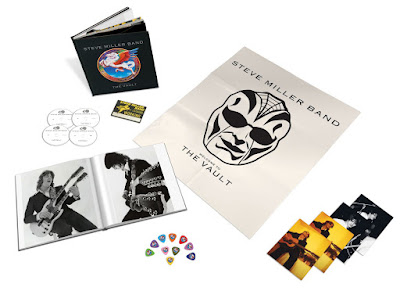 The DVD included in the set feels more like just a sampling of the Steve Miller Band, since it only includes one complete televised show, "Don Kirshner's Rock Concert." I'm not sure why this was the chosen show, since the footage is not great from the televised seventies version of the concert, but nonetheless, the Steve Miller Band are on fire. This show was recorded just prior to the "Fly Like An Eagle" album being released, as no one really cheers for the new composition, which would eventually become his theme song. The other videos are a really nice addition, like the home video camera that captured Steve Miller performing alongside his idol Les Paul and also Miller performing with his long-time friend James Cotton during one song for "ABC In Concert." I only wish that more of this show and also of the Steve Miller Band's appearance on "Austin City Limits" was included in this set, even if they had to include a second DVD of footage.
Now the lavish book that these discs come in feels like the real prize in this set with its cloth-bound cover and thick glossy pages, makes this a real nice treat to have on your shelf or your coffee table. Also included in this set are ten, multi-colored guitar pics with the Steve Miller Band Pegasus logo on them, along with a fold out poster of "The Joker" mask drawing and a replica backstage pass and photos. I hope that Steve Miller digs deeper into his vault and releases more outtakes and full concerts from his past, because this is a great taste into how wonderfully talented Steve Miller was as a songwriter, guitarist and singer. To find out more about this amazing new set, "Welcome To The Vault," please visit stevemillerband.com.
Posted by JP's Music Blog