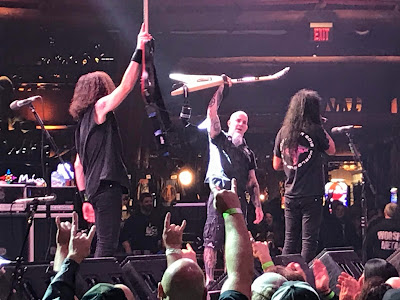 Heavy metal legends Anthrax closed out their "For All Kings" tour Friday night with a free show at the Wolf Den at Mohegan Sun. This tour, which began in January 2016, took them all over the world (more than once) and closed out the latest chapter in the band's resurgence. Even though this was a free show at a small, club like venue, Anthrax still treated it as if they were performing at one of the largest European festivals.

Their 12-song, 75-minute set was filled to the brim with heavy metal music, beginning with the opening energetic blast of "Caught In A Mosh," from one of their most popular albums "Among The Living." Anthrax found this setting the perfect opportunity to perform a few deep cuts that die-hard fans enjoyed, like "Metal Thrashing Mad," "A Skeleton In The Closet" and "In My World." The audience also shouted out the chorus to well-known gems like "Madhouse" and "I Am The Law," much to the band's delight.
Anthrax paid homage to a couple of their heroes (Ronnie James Dio and "Dimebag" Darrell Abbott) performing "In The End" off their "Worship Music" album, as the iconic "devil horns" were raised on each and every hand. The standing room audience stayed in control for most of the evening (due to the overabundance of security), but did let loose on the closing songs "Antisocial" and "Indians." A small mosh pit even broke out during the "war dance" section of "Indians," as Anthrax finished off the evening with a small tribute to Pantera, by performing the outro of their song "Cowboys From Hell."
Even though this show was not originally scheduled as part of their tour and wraps up a long, extensive time on the road, Anthrax appear ready for whatever the next chapter in their career may be. As one of the "Big 4" of thrash metal, Anthrax are truly legends and have always surpassed exceptions with their live shows.

Setlist: Caught In A Mosh, Metal Thrashing Mad, Be All End All, Madhouse, I Am The Law, Breathing Lightning, A Skeleton In The Closet, In My World, In The End, Medusa, Antisocial, Indians
Posted by JP's Music Blog