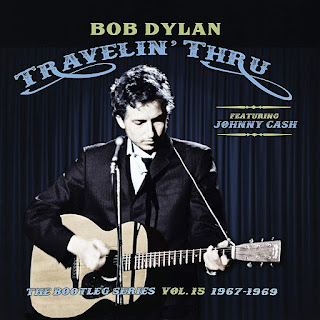 In 1967, Bob Dylan was fully embracing his country sound with a visit to Nashville to record songs that were unlike anything he had created before. He developed a mellow tone to his singing voice and wrote more concise songs centered around the American Midwest and the Bible. This creative force in Dylan would last for three years and create the albums "John Wesley Harding" and "Nashville Skyline." During this period, Dylan would also become close friends with the late, great Johnny Cash, who simply adored Bob's songwriting and thought very highly of the young musician.

This creative period is the subject of the latest volume of Bob Dylan's ongoing "Bootleg Series," which is titled "Travelin' Thru 1967-1969." This 3 CD or 3 LP set is the fifteenth volume of the "Bootleg Series" and was released on November 1st through Columbia/Sony Legacy. This new set features 50 tracks (47 previously unreleased) that have not been covered extensively by any past Dylan release and sounds so timeless, especially when he duets with Johnny Cash on some originals and traditional country classics.
The first disc centers around Dylan's two studio albums "John Wesley Harding" and "Nashville Skyline" with alternative takes of well-known songs like "All Along The Watchtower" and "Lay Lady Lay." Many of the alternative versions featured on this disc could have easily replaced the originally released version with the highlight being a previously unreleased bluesy outtake titled "Western Road."
Disc two and part of disc three center around the February 17th and 18th studio recordings between Bob Dylan and Johnny Cash. It's really great hearing the studio chatter between the two, as they work out the mash-up of "Don't Think Twice It's Alright/Understand Your Mind" and play around with the lyrics of the traditional folk tune, "Mountain Dew." The songs "Matchbox" and "Mystery Train" are given an extra jolt of energy with Carl Perkins lending a hand on lead guitar.
The second half of disc three features Bob Dylan's three-song set from his appearance on "The Johnny Cash Show," in which Cash joins Dylan on "Girl From North Country," which would eventually open his "Nashville Skyline" album. Dylan also sings the Johnny Cash classics "Ring Of Fire" and "Folsom Prison Blues" during the "Self-Portrait" sessions, which almost exceed the original versions, as Dylan showcases these songs in a different light, with extra emotion. This set closes with Dylan performing with the great Earl Scruggs on four tracks, including the classics "To Be Alone With You" and the short instrumental "Nashville Skyline Rag," which was originally featured on Dylan's "Nashville Skyline" album. To find out more about the latest volume of Bob Dylan's ongoing "Bootleg Series," please visit bobdylan.com.
Posted by JP's Music Blog