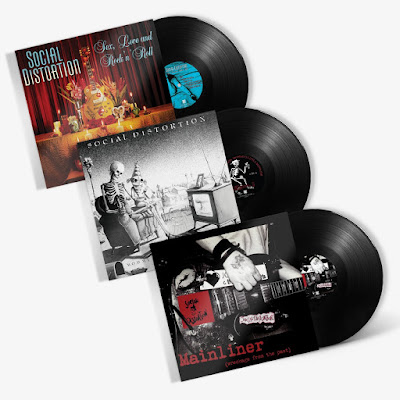 Back in September, Craft Recordings reissued three essential albums from the SoCal punk band, Social Distortion on vinyl. This set includes the band's 1983 debut "Mommy's Little Monster," their 1995 collage of early recordings titled "Mainliner (Wreckage From The Past)" and their 2004 return "Sex, Love And Rock & Roll." This new batch of vinyl releases also celebrates the band's 40th anniversary.

This is the first time these albums have appeared on vinyl since their original releases and it just proves that this is the only way to hear these classic releases. The "Mommy's Little Monster" album proudly displays the band's early hardcore punk sound, as this new vinyl release allows you to really hear and appreciate the full band. The bass in these songs simply hums, while Mike Ness' and Dennis Danell's twin guitar attack keeps up with the thunderous drums and Mike's autobiographical lyrics.
The "Mainliner" album collects some of Social Distortion's early singles and B-sides that were released prior to their full-length debut release. The band's sound was still rough at times, before their pinpoint focus was on their debut album. Social Distortion fans still love the classics like "1945" and their cover of The Rolling Stones' "Under My Thumb."
Next, we jump ahead to 2004's "Sex, Love And Rock & Roll," which had a lot of anticipation to live up to, since it was the band's first new release after an 8 year hiatus. It was also the first release that did not feature Ness' right-hand man, Dennis Danell, who passed away in February 2000. The band's energy and passion is still felt on the opening track "Reach For The Sky," which became one of Social Distortion's biggest hits. The subject of mortality and loss are heard throughout this album, as Social D gave their heart and soul to these performances. The music sounds really nice on vinyl, as the band's electricity and intensity just jumps out of your speakers. To find out more about these three new vinyl releases from Social Distortion, please visit craftrecordings.com.
Posted by JP's Music Blog