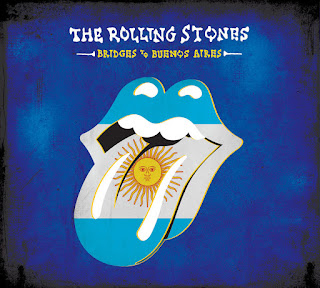 Eagle Vision has unleashed another amazing concert video from the iconic rock band, The Rolling Stones. Less than six months ago, Eagle Vision release The Rolling Stones "Bridges To Bremen" concert video and have just outdid themselves with this newly restored and remixed show from Buenos Aires. The new release titled "Bridges To Buenos Aires" is from the same tour, as this show took place on April 5th, 1998, the last date of their five-night-sold-out residency at River Plate Stadium. The show was recently released on November 8th on Blu-ray and DVD along with 2CDs or 3LPs.

The audience in Buenos Aires is huge and energetic, and they love their Rolling Stones, as the show kicks off with the classics "(I Can't Get No) Satisfaction" and "Let's Spend The Night Together." The video quality is excellent, although it is not in widescreen, it still displays great details. Many of the camera angle are super close, as you can follow Keith Richards' finger work on his guitar, or Mick Jagger's mesmerizing dance moves. After the blues of "Sister Morphine," the stadium explodes when Bob Dylan walks onstage to perform a rendition of "Like A Rolling Stone," which keeps the band on their toes, as Dylan never performs a song the same way twice.
Keith Richards gets his moment in the sun with a couple of his solo songs, before the band head over (the bridge) to their second stage for some loose renditions of "Little Queenie," "When The Whip Comes Down" and "You Got Me Rocking." The Rolling Stones close out their set of record setting shows with a string of concert staples like "Sympathy For The Devil" and "Honky Tonk Women." The Argentinean audience began singing "Start Me Up," right from the opening guitar riffs, even before Mick could get a word in, as their energy continued to flow throughout the entire two-hour performance. As the confetti flew through the air during a rocking version of "Brown Sugar," I couldn't tell who wanted to keep going longer, the audience or The Rolling Stones. I'm so very glad that Eagle Vision continues to roll out these shows, as more bands should take note and release classic concerts on Blu-ray, DVD, CD and vinyl. There is also a special limited edition colored vinyl version of this show available. To find out more about The Rolling Stones "Bridges To Buenos Aires" release, please visit eagle-rock.com.
Posted by JP's Music Blog