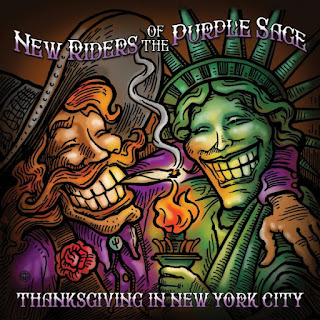 Classic American country rock band, New Riders Of The Purple Sage are celebrating their 50th anniversary as a band this year with the rare, Record Store Day release of "Thanksgiving In New York City." The show was performed on Thanksgiving in 1972 at the Academy of Music, which became the band's home for the next few years during Thanksgiving weekends. The band, which blossomed from the psychedelic music scene in San Francisco, also featured members of the Grateful Dead during its early days.

This new 2 CD set displays the band's stellar musicianship during the nearly eight minute jam of "Portland Woman" and the gentle flow of "All I Ever Wanted," while also mixing in bluegrass covers of "Hello Mary Lou" and "She's No Angel." The NRPS also know how to rock as displayed during "Groupie" and they showcase their love for country music with "Whiskey."
The second disc continues with the mix of classic covers like "Long Black Veil" and "Honky Tonk Women" along with the laid back, west coast vibe of "Rainbow." New Riders Of The Purple Sage build the tempo back up with a rocking seven-minute version of "I Don't Need No Doctor," before closing out the evening with an epic, ever-popular rendition of "Willie And The Hand Jive." This set also includes a new easy from radio director, producer and host, Rob Bleetstein. To find out more about this stellar new live release, please visit omnivorerecordings.com. 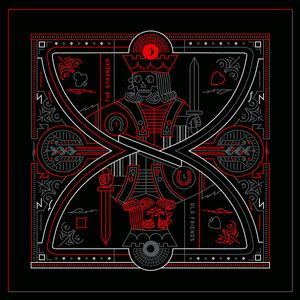 From Salt Lake City, Utah comes the new full-length album from the alt-country band, Triggers & Slips. Their new release titled "The Stranger" features eight tracks, beginning with the title-song that carries a classic country twang that feel like a much-welcomed flashback to simpler times in music. The story of "Natchez Trace" continues to build with intensity, as the band pick the energy up, while "Blue Smoke" chugs along to the song's bluesy train-like rhythm. Triggers & Slips wrap up their new album with the honky-tonk feel of "Old Friends," the Americana touch of "Dig A Hole" along with an amazing cover of the Alice In Chains classic "Rooster." To find out more about Triggers & Slips and their latest release "The Stranger," please visit triggersandslips.com.
Posted by JP's Music Blog