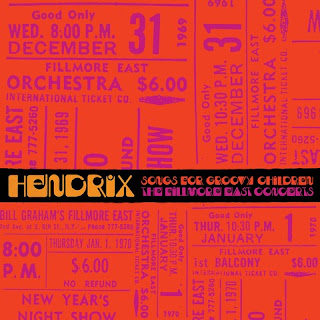 On November 22nd, the Experience Hendrix label, in association with Sony Legacy, released a brand new box set titled "Songs For Groovy Children." It features the legendary New Year's Eve and New Year's Day shows from Jimi Hendrix's latest group, the Band Of Gypsys. This new trio found Hendrix teaming up with his old army buddy Billy Cox on bass and Electric Flag member Buddy Miles on drums. This band would change the landscape of modern rock music at the time in just two short days. The album that followed these performances was simply titled "Band Of Gypsys" and combined the worlds of rock and funk, which inspired many rising young bands like Parliment-Funkadelic and Bootsy Collins.

This new set features, for the first time, the band's entire four-show performance at the Fillmore East, newly remixed and remastered to delivery the best that these songs have ever sounded. Also, this set boasts over two dozen tracks that have never been previously released, including rare gems like "Stop" and "Steal Away." Listening to these shows is a stunning experience, as it's hard to image that this band have been together less than three months prior to these breathtaking performances.
During this run of shows, the Band Of Gypys also perform mostly new compositions like "Power Of Soul," "Izabella" and "Machine Gun." Hendrix only touches upon his early catalog half-a-dozen times with songs like "Fire," Foxey Lady," "Hey Joe" and "Purple Haze." Hendrix sounds more excited and energetic playing their new compositions, as the Band Of Gypys blaze a trail through other new songs like "Ezy Rider" and "Earth Blues." Each time they perform the songs "Changes" or "Burning Desire" you get a different performance of the song that outdoes the one before. This new 5 CD/8 vinyl LP is the latest statement in Hendrix's continuing posthumous legacy and it will certainly have fans dissecting these shows for years to come.
Also featured in this set is an amazing 40-page, full color booklet, which includes a new, in-depth essay from bassist Billy Cox and many great, unpublished photos from the performance and backstage. To find out more about the new Jimi Hendrix/Band Of Gypsys box set "Songs For Groovy Children," please visit jimihendrix.com.
Posted by JP's Music Blog