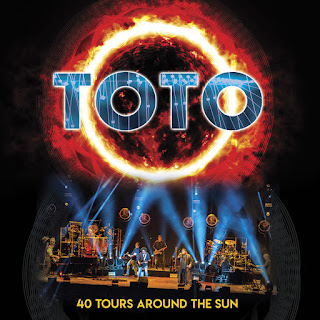 American rock band, Toto are celebrating their 40th anniversary with a new live set of releases titled "40 Tours Around The Sun." It was first released on CD and vinyl back in September and then the video portion was released on DVD and Blu-ray on November 15th through Eagle Vision. It captures the band performing a show in front of 18,000 fans at the Ziggo Dome in Amsterdam on March 17, 2018.

The show encompasses the band's entire forty year career in a little under two-and-a-half hours. Toto were also touring behind their latest studio album "Old Is New," which actually came out eight months after this show. The band preview some of their new tracks like "Alone" and "Spanish Sea" during this show, which fit in perfectly next to their classic hits like "Hold The Line" and "Rosanna." Toto make the setting more intimate by explaining and performing songs from their early years like "Miss Sun," "Holy Anna" and "No Love." A couple of surprises in the set are a short run through Michael Jackson's "Human Nature," which was originally written by Toto pianist, Steve Porcaro, and a sampling of one of the band's first singles "Georgy Porgy."
The video puts you right on stage with the band, as it tries to capture every moment by every band member during the show. Singer Joseph Williams sets the pace for the second half of the Toto's performance, along with guitarist Steve Lukather and pianist David Paich on their progressive rock number "Angela." Seeing the fans sing every word to deep cuts like "Lion" and watching the band perform "Dune (Desert Theme)" make this video a worthy partner to the CD and vinyl set.
The show finishes with run through a couple of hits from the early eighties, "Stranger In Town" and "Make Believe," before delivering the revived mega-hit "Africa." The song wraps up with an extended percussion solo by Lenny Castro and a playful back and forth with the audience. The final encore consisted of the "autobiographical" song "The Road Goes On," as Toto seem genuinely grateful for being able to celebrate 40 years together with their fans. To find out more about the new video release of "40 Tours Around The Sun," please visit totoofficial.com.
Posted by JP's Music Blog