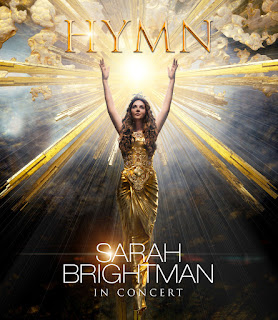 World-renowned soprano Sarah Brightman recently released a new video titled "Hymn: Sarah Brightman In Concert" through Eagle Vision. It features the singer in her most elaborate performance to date, as she worked along side Anthony Van Laast (Beauty And The Beast) and Frank Peterson to create a hybrid of a musical film. This two-act performance takes place in the enchanted Bavarian Alps and stars Brightman, accompanied by her band, the Bavarian Philharmonic orchestra, a 50-voice choir and the Ludwig Ensemble of dancers. The film was released on November 15th in DVD and Blu-ray format with an accompanying soundtrack CD, which includes highlights of the entire two-act performance.

The first act showcases Sarah Brightman performing live on stage, without an audience, as each song is portrayed as an individual performance along with full set and costume changes. She mixes in some modern songs like "Stranger In Paradise" and "Who Wants To Live Forever" with some of her more contemporary songs like "Carpe Diem" and "Gia Nel Seno." The sultry "Follow Me" and the stellar "Miracle" showcase Brightman's range as an artist and a performer.
The second act finds Brightman in front of a live audience, as her voice simply sounds amazing, performing the songs "Sogni" and "There For Me" with special guest singer Vincent Nicio. The epic numbers "Better Is One Day" and the "Fly To Paradise" shows off Brightman's stellar band, as they collaborate with the orchestra and choir on some of the highlights of this live performance. Sarah Brightman closes out her show with an amazing rendition of "Phantom Of The Opera" (which she stared in on Broadway) with Mario Frangoulis and grand finish of "Sea And Sand," as once again Sarah lets her voice be the star of show.
Special bonus features on both the DVD and Blu-ray contain a behind the scenes look into the production of "Hymn In Concert." Also included is a track by track review of the album, along with the "Hymn The Album Production" and photo slide show. To find out more about this new release from Sarah Brightman, please visit sarahbrightman.com.
Posted by JP's Music Blog