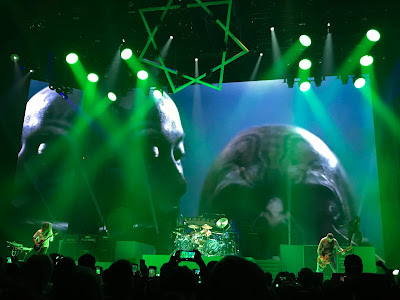 Hard rock giants Tool have returned to the east coast after a lengthy hiatus to tour behind their brand new #1 selling album "Fear Inoculum." While the album may have taken 13 years to complete, the band sounded as fresh and rejuvenated as ever during their stop at the Mohegan Sun arena on Thursday night.

The sold-out venue was definitely ready, as a huge roar of applause echoed throughout the arena as opening, screeching notes of "Fear Inoculum" rang from the speakers. The sound that these four band members create is simply stunning, as drummer Danny Carey and bassist Justin Chancellor laid down the groundwork with their thunderous rhythm section. Guitarist, Adam Jones performs so effortlessly, producing electrifying guitar solos that just make your jaw drop. Singer, Maynard James shied away from the spotlight, taking up residency on either side of the drum kit, allowing his lyrics and the music to become the main focus of the show.
The first few songs were performed behind a nylon-type, see-through curtain which allowed images to be projected onto, as the stage and screens were as part of the show as the music. Once the curtain opened during the song "Parabola," the audience went nuts, as if the barrier between the band and the fans was taken down. Another new song that Tool performed was "Pneuma," as laser shot across the arena, while the chest pounding rhythm of "Jambi" certainly helped rev up your heartbeat.
While Maynard James didn't talk much with the audience, he did point out that the next song the band would perform, "Intolerance" was older that some of the younger fans that were in attendance. Tool closed out their set with the extended jam of "Forty Six & 2," as guitarist Adam Jones incorporated a surround sound effect and bassist Justin Chancellor worked his fingers up-and-down the neck of his bass during their solos.
After a short intermission, drummer Dana Carey took his place in front of the giant gong to delivery his concert staple drum solo "Chocolate Chip Trip." Not only was his drumming an amazing sight to behold, but he incorporated electronics into his performance to give his solo a multi-layered sound. The band closed the show with the chugging rhythm of another new track, "Invincible" and then delivering an extended pounding version of "Stinkfist," in which the cell phone ban of the evening was lifted as fans were allowed to snap photos for prosperity.
Trying to describe a Tool concert is not an easy thing, but words like "stunning," "amazing," "awesome" and "outstanding" kept being said when discussions of the show followed. So whether is was your first Tool show (like myself) or your tenth, this is one of the premier live bands in the world and their shows need to be on your bucket list of concerts that need to be seen.

Tool kicked off their Fear Inoculum 2020 tour and it looks like a great show if you are a fan. Check out the full Tool setlist here.