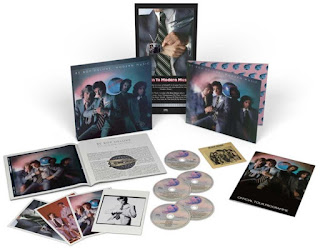 English progressive rock band, Be-Bop Deluxe found moderate success during the seventies, mixing together elements of glam rock, prog rock and just straight-up rock and roll. The band released a handful of studio albums between 1974-1978, with their album "Modern Music" being their highest charting release in the U.K. and in the U.S. As a celebration of Be-Bop Deluxe and their album "Modern Music," Cherry Red Records has released a new deluxe five disc limited edition box set. It is comprised of four CDs and a DVD that will allow fans to dive deeper into the album's unique sound with three mixes of the album (original stereo mix remastered, a new stereo mix & a 5.1 surround sound mix on the DVD).

The first two CDs are almost identical, as far as track listing, with the exception of early versions of the songs "Forbidden Lovers" and "The Bird Charmer's Destiny" on disc two. The remastered sound is exceptional, as you can hear the perfect balance of music and vocals, especially during the wonderful harmonies of "The Gold At The End Of My Rainbow" and the high-energy rocker "Bring Back The Spark." Be-Bop Deluxe also weave their magic through the eight-minute B-side "Shine" which has also been added. The first versions of "Forbidden Lovers" and "The Bird Charmer's Destiny" are also a nice addition, but their stark, raw sound only makes you wish that there was a whole disc of early versions of songs from the album, in order to see their development.
Fans will be diving straight for the third and fourth discs which features two of shows from Be-Bop Deluxe performed in 1976. The band was recorded for BBC Radio One "In Concert" during their performance at the Hammersmith Odeon, London. The nine-track set showcases the band playing live in front of their home crowd, mixing together songs from the recently release "Modern Music" album, along with classics, like "Ships In The Night." Highlights from this performance have to be the nearly 13-minute prog-rock masterpiece of "Modern Music" and the jam-filled set closer "Blazing Apostles."
The real undiscovered gem may be the previously unreleased show, recorded March 21st at the Riviera Theatre in Chicago, six month before the release of their "Modern Music" album. The recording is not professional and the sound of the show is missing the deep lows in the bass, but this is definitely very listenable and is worth the addition to this set for it's rarity factor alone. The band's sound is simply magical, as they deliver an edge to their music, as in "Life In The Air Age" and "Maid In Heaven." The amazing guitar work of Bill Neslon is on full display during "Bill's Blues," while a seventeen-minute "Blazing Apostles" showcases the talents of the full band.
The DVD not only features a new 5.1 surround sound mix of the album, but also a couple videos of the band performing "Forbidden Lovers" and "Down On Terminal Street" from BBC's "Old Grey Whistle Test" show. This new deluxe five disc box set from Be-Bop Deluxe also includes an illustrated book with tons of previously unseen photos and a new essay from Bill Nelson. Post cards and a replica poster are also included with this set. There is also a two-disc expanded version of this release which includes the original stereo mix of the album remastered from the original master recordings and the new 2019 stereo mix of the album. To find out more about this elaborate collection of Be-Bop Deluxe's "Modern Music" album, please visit cherryred.co.uk.
Posted by JP's Music Blog