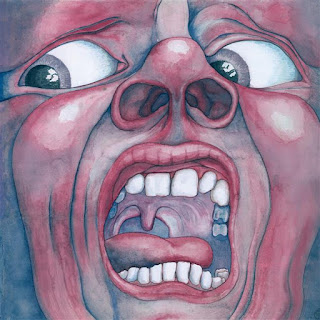 Back in 1969, an English rock band would create an album that would change the face of rock music forever. That band is King Crimson and the album they released back in October of 1969 was "In The Court Of The Crimson King." While this album may not be as well known as The Beatles' "Sgt. Pepper's Lonely Hearts Club Band" or The Beach Boys' "Pet Sounds," "In The Court Of The Crimson King" was a huge inspiration for artists looking to break the mold of what was being projected of how rock music should be. In celebration of the album's 50th anniversary, King Crimson released a new 3 CD/Blu-ray edition of the album that includes a brand new 2019 mix of the album, along with outtakes and original mixes of the album.

The first disc features the new 2019 stereo mix of the album, which sounds stunning. You can hear every instrument, without one instrument overpowering the other, which allows the strings and flute to flow fluidly through songs like "I Talk To The Wind" and "Moonchild." The masterpiece recording of "The Court Of The Crimson King" is fully appreciated, allowing you to take in everything that King Crimson poured into their performance of this song. The disc closes out with new instrumental mixes of the songs, which allows you to simply get lost in the music, especially during "Epitaph."
The second disc is where most of the outtakes and studio session work resides, including an early raw take of the monumental opener "21st Century Schizoid Man." Alternate takes of the songs "I Talk To The Wind" and "Epitaph" display subtle hints, as you will enjoy pointing out the differences that you may come across. Another great addition is hearing an early take of "In The Court Of The Crimson King," which lacks the punch of the final version, but still showcases the grace and beauty of the music.
Disc three of this set features the album's original 1969 mix, along with the mono, single version of the title song that is broken up in two parts. All the songs in this set sound great and definitely improves upon the 40th anniversary edition of this album. The Blu-ray disc includes everything that is on the 3 CDs, along with video fragments of King Crimson performing at Hyde Park in 1969. Plus, there is also a new double-vinyl edition of this release which includes the new 2019 mix of the album, along with many of the studio outtakes and rarities that were remastered for this new release. To find out more about the new 50th anniversary edition of the iconic King Crimson "In The Court Of The Crimson King" album, please visit schizoidshop.com.