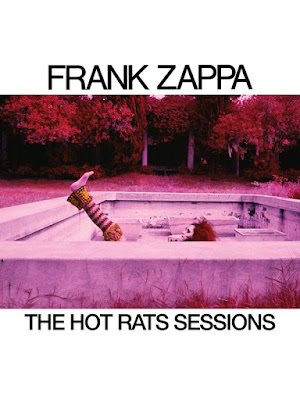 Arriving December 20th is the latest release from the Frank Zappa vault, "The Hot Rats Sessions." This release co-insides with the album's 50th anniversary, which was originally released in October of 1969 and was Zappa's first album after dissolving his former band, the Mothers Of Invention. This new six-disc box set contains everything you could want from the recording sessions, as you can follow the songs from their conception to near completion.

This first disc of the set finds Frank working with pianist Ian Underwood on the melody for "Peaches en Regalia," before Zappa conducts the rest of the band through the early stages of the song. The ten minute "Peaches En Regalia (Section 1, In Session)" is a great starting point, with Frank finding the right sound for the song, as they perform different segments of this instrumental. Equally as great on the first disc is the two-part "Peaches Jam - Part 1 & 2," which just allows the band to let loose and explore the studio during these recording sessions.
You will also find hidden gems of songs that were first conceived during these sessions like "Arabesque," "Dame Margret's Son To Be A Bride," "Natasha" and "Bognor Regis." Disc two finds Frank working with Ian Underwood once again on the beginning stages of "It Must Be A Camel," but the highlight of this disc has to be the unedited 15-minute version of "Willie The Pimp." The band comes together magically on the delivery of this song, which is also one of the highlights of the original album and the only song that featured vocals from Captain Beefheart.
The first half of disc three features the rehearsals of many of the different sections to the jazzy piano medley of "Transition." Also included on this disc are the unedited master versions of the bluesy "Directly From My Heart To You" and the complete twenty-eight minute jam of "Another Watlz." Portions of both of these songs would show up again on future Frank Zappa albums.
During the second half of this new box set is where we begin to see the master takes and full versions of the songs "Son Of Mr. Green Genes" and "Arabesque." The epic, 32-minute "Big Legs" unedited master take finds the band feeling their way through the song, as they quickly lock into a jazz fusion jamming groove that just continues to climb with excitement and held together by the rhythm section of Max Bennett on bass and Paul Humphrey on drums.
Discs five and six is where the 1987 digital remix of the album resides, which was overseen by Frank Zappa. Also included are many radio adverts for the "Hot Rats" album and single mixes of "Peaches En Regalia" and "Little Umbrellas," which are noticeable different than their album versions. The set closes with a trip back to 1969 with some original mixes of album outtakes like "Dane Margret's Son To Be A Bride" and "Bognor Regis."
This set also includes new essays by Matt Groening (The Simpsons), Andrew Nathanson and Joe Travers, along with never before published photos of Frank in the studio and outtakes of the classic cover shoot. In celebration of the "Hot Rats" album's 50th anniversary, Zappa Records is releasing a translucent hot pink vinyl edition of the album. To find out more about the newly released "The Hot Rats Sessions" 6-CD box set, please visit zappa.com.
Posted by JP's Music Blog