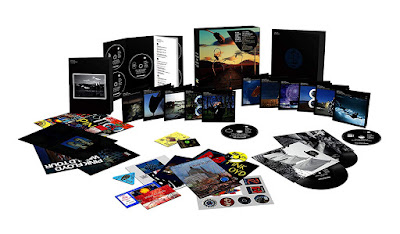 Just three years ago, Pink Floyd dug into their vault to release the massive 33-disc box set titled "The Early Years 1965-1972." It extensively covered that first period of the history of the classic rock icons Pink Floyd with tons of previously unreleased and remastered material. Now, fast forward to December 13, 2019 and Legacy Recordings, along with Pink Floyd Records, return once again to delivery a new 18-disc box set titled "The Later Years," which covers the band's period between 1987-2019. This set centers around the band's existence without co-founder Roger Waters and centers around remaining members guitarist/singer David Gilmour, drummer Nick Mason and singer/keyboardist Rick Wright.

Let's begin with the audio segment of this new box set, which features five (1 studio & 4 live) CDs worth of music. The one lone studio CD included in this set features a newly remixed and updated version of Pink Floyd's 1987 album "A Momentary Lapse Of Reason." This new edition restores all the contributions of keyboardist Rick Wright and includes new contributions by drummer Nick Mason, in order to balance the creative input by the three members of Pink Floyd. You will notice the subtle differences in songs like "The Dogs Of War," "One Slip" and "Terminal Frost," as a cleaner sound is heard throughout the album. The balance of power is felt in the album closer "Sorrow," as Gilmour's guitar work is fully supported by the pounding rhythm of Nick Mason and atmospheric elegance of Rick Wright's stellar keyboards.
The other four CDs feature Pink Floyd live with a newly remixed and restored version of the concert classic release "Delicate Sound Of Thunder." This set takes the original fifteen-song release and reinstates the songs that were also recorded, but were left off the album. The new 23-song release of this live album sounds amazing and features some of the best live performances by the band, as they toured to support the "A Momentary Lapse Of Reason" album by performing every song on the album. 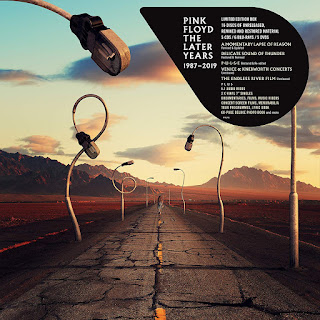 Another full show included in this set is Pink Floyd's appearance at Knebworth in 1990. They performed a seven-song set, which featured a condensed version of their two-hour plus concert. The treasure to many fans will be fourth CD in the set which includes a handful of rare live recordings from 1987 and 1994, along with unreleased studio recordings from "The Division Bell" sessions. This disc also includes my personal favorite version of "On The Turning Away (Live, Atlanta 1987)," which features a gospel-like harmony chorus that gets overtaken by some of David Gilmour's best live guitar work. These five live recordings have been included as B-sides to many singles from this era of the band. The additional seven tracks hat are included on this disc are from "The Division Bell" sessions. This set of mostly instrumental songs seem to bridge the gap between the rock album, "The Division Bell" and the ambient, mostly instrumental follow-up, "The Endless River." The songs represented the transition that Pink Floyd displayed at the time, where the music was what mattered and there was no need for lyrics.
The second half of "The Later Years" box set is where the visual content lies on DVD and Blu-ray. What may seem like a redundancy, by including the new "A Momentary Lapse Of Reason" album is actually a new 2019 remix of the album in 5.1 surround sound. Also included is the 2014 remix of of "The Division Bell" album presented in 5.1 surround sound, along with the seven previously unreleased studio sessions, mixed in 5.1 surround sound. 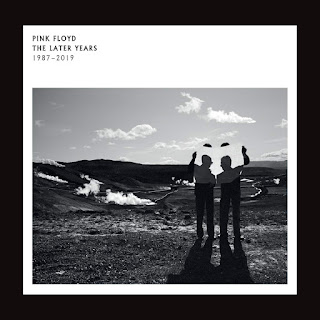 This set also includes four filmed concerts, "Delicate Sound Of Thunder" (restored and remixed for Blu-ray), "Pulse" (restored and re-edited in dts Master audio 5.1 surround sound), the 1989 Venice Concert and the 1990 Knebworth Concert. All of the short concert films that were created for the "A Momentary Lapse Of Reason" concerts and "The Division Bell" concerts are also included in this set, as well as tour rehearsals from 1994. A 5.1 dts Surround Sound version of "The Endless River" (which was released in 2014 on Blu-ray) is featureed in this set, along with loads of footage of the band promoting their releases between 1987-2014.
This new "Later Years" box set should keep fans busy dissecting every phase of the band during these last thirty years. All of the film footage has been cleaned-up and presented in its best form possible and with the best sound possible that will certainly give your speakers a work out. If this massive 18-disc box set is too much for you to behold, there is also a condensed single CD version featuring some of the highlights from this box set, which is also available as a double-vinyl set. To find even more about the new Pink Floyd "The Later Years" box set, please visit thelateryears.pinkfloyd.com.
Posted by JP's Music Blog