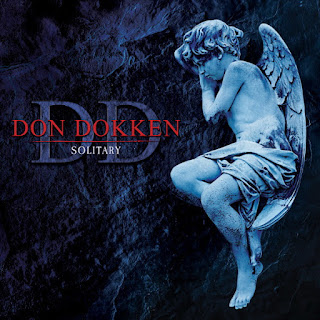 Heavy Metal icons Don Dokken and George Lynch will be crossing paths for some live shows this summer in the U.S.. The two have not toured together in almost five years, since the classic Dokken line-up played together in Japan in 2016. Singer Don Dokken is also reissuing his 2008 solo album "Solitary" on January 31st through Deadline Music in association with Cleopatra Records. It features a mix of original compositions and cover songs done acoustically, which was originally only available at his shows.

Dokken may be best known for the hard-hitting metal tracks "In My Dreams" and "Breaking The Chains," but this new reissue of his solo album showcases his quieter side with songs like "In The Meadow" and "I'll Never Forget." Dokken also received help on this album from some friends (Tony Franklin on bass and Vinnie Colaiuta on drums) on such songs as "Ship Of Fools" and "You Are Everything."

This new reissue includes three bonus tracks that where not on the original release. The first one you come across is the emotional piano ballad "Jealous" that finds Don pouring his heart into this performance. One of the more interesting tracks on this new reissue is Don's cover of Celine Dion's "My Heart Will Go On," which finds Don at his most fragile. The final bonus track is another piano ballad, which delivers the grand appeal of "All That Love Can Be" that also displays Don's passion for singing, whether its heavy metal or heartfelt ballads. Don Dokken's new release will be available on CD, digitally and on special limited edition red vinyl. To find out more about "Solitary," please visit cleorecs.com.
Posted by JP's Music Blog