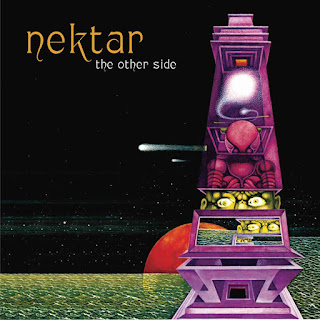 The U.K. progressive rock band, Nektar return with a new studio album titled "The Other Side." It is the band's fourteenth studio album and their first in six years. Some of the songs on this new release are over four decades old, but are appearing on a Nektar studio album for the first time.

The band kick things off with "I'm On Fire," which was originally a poem written by Derek "Mo" Moore to his soon-to-be wife back in 1978. The eight-minute musical piece is the perfect beginning to the album, with it's climbing melody to showcase the latest line-up of the band and how amazing they are together as a group. The song "Skywriter" was released as a single last November and got the excitement of new music building for fans. Nektar stretch out their musical journey with the nearly eighteen-minute rock suite of "Love Is / The Other Side," before the short, synthesizer-melody of "The Light Beyond." Nektar finish up their new album with the emotional ballad "Look Through Me" and the perfect prog-rock closer "Y Can't I Be More Like U" with its mix of time signatures and poetic lyrics.
Nektar are currently on the road in the U.S. with shows scheduled from now until the beginning of March. To find out more about the band and their new album "The Other Side," please visit nektarsmusic.com.
Posted by JP's Music Blog