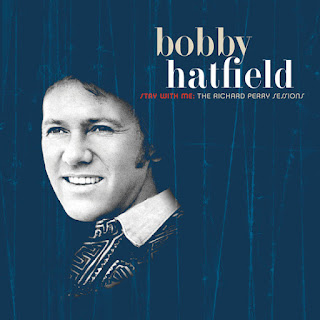 Vocalist Bobby Hatfield (one half of The Rightous Brothers) found huge success in the sixties with the #1 single "You've Lost That Lovin' Feelin," and it's successor "Unchained Melody." After leaving The Rightous Brothers in 1971, Hatfield wanted to try his hand at a solo career, releasing only one album ("Messin' In Muscle Shoals").

In 1971, Richard Perry was becoming one of the most successful record producers of the era, working on Barbra Streisand's "Stoney End" album and on Harry Nilsson's "Nilsson Schmilsson." Perry's next task was producing an album for Bobby Hatfield, which was never released except for a couple of singles, which failed to make a dent on the music charts.
Now, after sitting in the vault for almost five decades, comes the arrival of the long lost Bobby Hatfield album, "Stay With Me," which was produced by the great Richard Perry. It features thirteen tracks of mostly complete tracks recorded in the studio with an all-star cast that included Ringo Starr, Klaus Voormann and Al Kooper.
The set includes upbeat, R&B renditions of George Harrison's "What Is Life" and "Sour Milk Sea," along with a great energetic run through Marvin Gaye's "Baby Don't You Do It." You can appreciate Bobby Hatfield's timeless vocals on the ballad "In The Still Of The Night," while also diving into his soulful funk side with "Rock 'n' Roll Woman." This new set also includes the original singles of "Stay With Me" and "Oo Wee Baby, I Love You," as well as alternate takes of these two songs that catch the development of these and other tracks Hatfield recorded during his time in the studio.
This new, previously unreleased album from Bobby Hatfield will be available on February 14th through Omnivore Recordings. For more information on this release, please visit omnivorerecordings.com.
Posted by JP's Music Blog