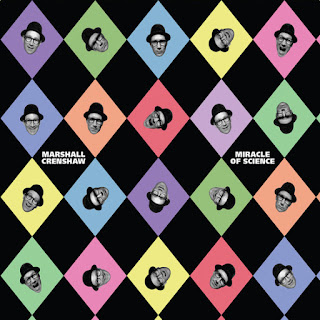 One of your New Year's resolutions will be to rediscover the work of singer/songwriter Marshall Crenshaw. Beginning on January 17th, the Shiny-Tone label (via Megaforce) will be re-releasing three of his later day albums, starting with 1996's "Miracle Of Science." This was Crenshaw's seventh studio album and his first on the Razor & Tie label and also the first time he recorded at his home.

The original twelve song release gets three extra bonus tracks on this new reissue, making this the ultimate version of the album (at the moment). Marshall Crenshaw kicks off the album with a quick soundbite, before delivering the upbeat, folk-rock of "What Do You Dream Of." He blazes a trial with some sweet slide-guitar on the country-flavored "Who Stole That Train" and the alt-pop vibe of "Starless Summer Sky." In between, Marshall Crenshaw also showcases his softer side, with the quiet, jazzy acoustics of "A Wonderous Place," before he closes out his album with the experimental, backwards noise of "Rouh Na Selim Neves."
This new release still features the corrected straight-on version of "Seven Miles An Hour," which appeared on the original album, but is added here as a bonus track. The other two bonus tracks consist of cover songs, as Marshall Crenshaw performs a swinging, strumming cover of "What The Hell I Got" (by Canadian artist Michael Pagliaro) and a bluesy-pop rendition of Daniel Wylie's "Misty Dreamer." There is also a new video for the track on YouTube (youtube.com). For more information about the new re-issue of Marshall Crenshaw's "Miracle Of Science," please visit facebook.com/MarshallCrenshawOfficial.
Posted by JP's Music Blog